My dad was a general contractor, who built custom homes and small commercial projects.  He had learned carpentry from his father, who had been a successful home builder in Detroit, Michigan, before the Great Depression.  During World War II dad worked at Douglas Aircraft Company where part of his job was as a (wood) jig and fixture builder.  After the war he worked briefly for another general contractor, and by 1946, he became a California licensed contractor.  In his early contracting years, he took labor contracts framing custom homes.  By 1951, he was building his own custom homes for sale.
I dearly loved my dad, but he was a difficult man to work for.  Growing up during the depression gave him a strong work ethic.  Being raised by a father who was an no-nonsense Englishman made him a stern disciplinarian.  Add to that, the fact that dad stood 5'-4".  Everything in life was a competition to him, so he was extremely hard to please.
In 1956, I began working for him after school, on weekends, and during every summer vacation.  He expected me to earn enough money to buy my own clothes and school supplies.  I learned a lot more than just a carpentry trade working for him because when work was slow, he'd hire me out to one of his subcontractors.  Over the years (at his apprenticeship) I worked for plasterers, brick masons, concrete contractors and framing contractors.
The most memorable work experience during my high school years was the summer of 1958.  Dad decided he could make more money if he had a one-sack cement mixer rather than paying the exorbitant prices for ready mix trucked from Fresno to Oakhurst.  He obtained a contract to build a motel, so I spent most of a summer feeding sand, gravel and cement into a enormous concrete mixer.  The good news was that the year before as a sophomore, I weighed a whooping 112 lbs. when I signed on for the school football team.  The beginning of my junior year--after shoveling the ingredients for ready mix and framing that motel--I weighed in at 150+ lbs.
Working for dad I learned to do concrete work, frame buildings (rough carpentry), and finish carpentry (hanging doors, installing wood windows, etc.).  We also did most our own sheet metal work, exterior lathing, insulation, and a plethora of other incidental trades. 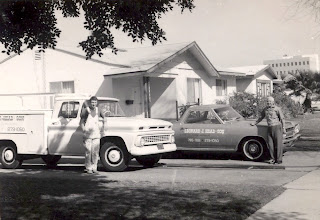 In short, he taught me everything I needed to know to begin a career as a home builder.  I will ever be grateful for the training he gave me because it gave me the basics for a successful and lucrative career in the home building industry.  In 1966, dad made me a partner (albeit a junior one) in his contracting business.
During a recession In 1968,  dad's contracting work was extremely slow.  He took a job as a construction superintendent for a major home builder, and I went to work as a shipwright in the Long Beach Navy shipyard.  By 1969, I also found work for one of the nation's largest home builders, but that's the next chapter of my fifty-year career.
Posted by Drifting Cowboy at 7:37 AM