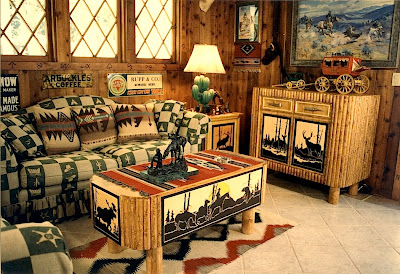 It's great fun for me to look back at the progress of my cowboy chic furniture built and marketed as "Lure of the Dim Trails" between 1989 and 2002.  As I pointed out in an earlier post ( http://a-drifting-cowboy.blogspot.com/2011/11/cowboy-folk-art-lure-of-dim-trails.html ) my original inspiration was the silhouetted furniture created by the late Thomas Molesworth.  As time went on and I traveled more, my knowledge base expanded, allowing my art to grow, especially after attending a couple of the Western Design Conferences in Cody, Wyoming.  The coffee table, end table and credenza above were built about 1995. 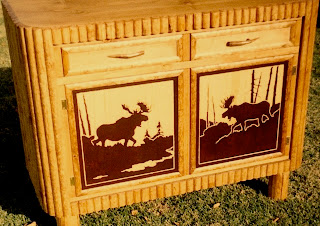 The sideboard above was a commission earned at the second design conference.  It has drawers and doors, and was designed to work as a sideboard for a home in Big Sky, Montana.  The owner often has moose traveling through his backyard, which set the theme. 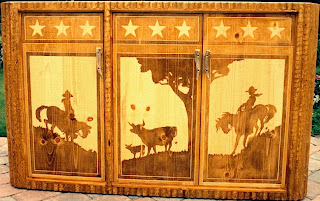 The "Californios" credenza above was a serious learning curve for my cabinet-making skills.  The owner was a California cattle rancher who needed a credenza to house his television and stereo.  The two doors on the right open and slide back into the cabinet.  There's also a sliding shelf that allows the television to be pulled forward and swivel for viewing. 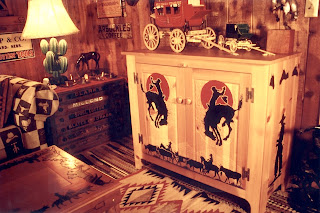 The little cabinet above was an unpainted furniture item purchased about 1990 from a local shop at the beginning of my folk art career.   Over the years I found lots of plain cabinetry that I could decorate and finish without spending an extraordinary amount of time crafting a one-of-a-kind piece of furniture.  The more rustic pieces needed to be hand-crafted.  They cost a lot more because of the extra time required to fabricate them. 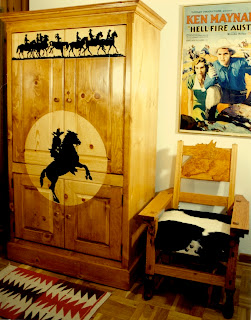 Above left is a "Dude Riders" armoire which is a perfect example of my use of unpainted furniture crafted by others.  Next to it (on the right) is an absolutely one-of-a-kind chair with a relief-carved horse head on the back rest, six-guns carved for armrest supports, and cowboy boots carved into the bottom of the front legs.  The chair was an absolute labor of love and took more than a week to build. 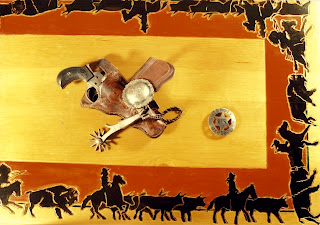 I named the coffee table above"Prairie Crossing."   It was one of my earliest pieces created about 1990.  It features cowboys on a trail drive and Indians hunting buffalo.  What could be more Western?  It found a good home in Bridgeport, California.
Posted by Drifting Cowboy at 7:24 AM