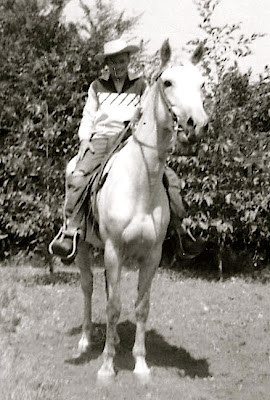 In the 1950s when I was growing up in Woodland Hills, California,  plenty of interesting characters were left over from an earlier era, reminding me of a passing West.
One day while out on a trail ride with my Arabian mare Susie Q (above), I met a fellow named Don Branstetter, who rode a beautiful Arabian stallion named Baleyn.  We got to be pretty good friends, and Don showed me some wonderful new places to ride.  We used to take our horses under Ventura Boulevard in Calabasas--we'd ride through a huge 8' culvert to gain access to trails in the Santa Monica mountains.  In Calabasas, we'd often stop by the old general store for a Nehi soda (strawberry was my favorite).
Don really loved that stallion.  He would do some mighty interesting things with that horse. I remember him holding up his canteen so he could share a drink with Baleyn.  He even invited the horse into his house.  I'll admit ol' Baleyn had pretty good manners. 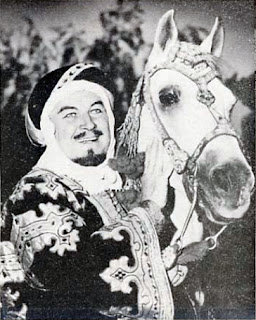 A special treat was watching Don and Baleyn  dressed in full Arabian attire in the Rose Parade (Pasadena Tournament of Roses Parade).
I have thought about Don and Baleyn many times over the last half century, so last night I decided to "google" them.  Amazingly, I found a story about "Animal Communication" that had been published in German.  Google translated it for me (it didn't read all that well).  However, I did learn that Baleyn had starred in two period movies--The Big Fishermen (1959) and Diane (1956).
If you're still with me, you are probably wondering "Where's the six degrees of separation?"  Okay here it is--I looked up the credits for The Big Fishermen (1959) and discovered it was filmed (in part) on the Iverson Ranch, a movie ranch I have been researching for a dozen years, and about which I penned two books.  Even more interesting to me was that The Big Fisherman was produced by Rowland V. Lee.
In 1969, while I was working for Kaufman and Broad, Inc., a very prominent home builder,  I helped redevelop Mr Lee's estate,  rebuilding a lake and many new homes in West Hills, California.