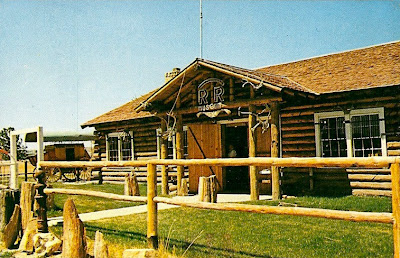 Back in the 1990s, I was a vendor at Brian Lebel's Old West Show in Cody, Wyoming.  Since Cody was a hard two-day drive from my home, I always allowed extra time for a few side adventures.  I almost always drove up to Billings, Montana, to haunt an antiques row located in the seedier part of the berg.  Occasionally I would discover a rare find there--like the Al Furstnow Miles City Saddlery enameled sign I purchased for $400 (and later sold for $800).

I had read about a modest museum in Miles City, Montana, about 2 hours east of Billings on I-94.  The Range Rider Museum was said to house a great collection of bits, spurs, and other cowboy trappings, all of which had been donated by local families who were part of the history of this early cowtown.
The easy drive from Billings turned out to be somewhat of an ordeal because it rained so hard that my Jeep Cherokee would hydroplane if I exceeded 40 mph.  About midway through the drive, the car in front of me hit one of two deer crossing the highway, forcing me to do some fancy driving to avoid the survivor.
The museum wasn't as fancy as the Buffalo Bill Historical Center or the Autry National Center of the American West, yet it still had a nifty collection of cowboy memorabilia, including a fine collection of art (including some Charlie Russell), firearms, photographs, and native American artifacts.
After touring the museum, I headed to downtown Miles City to find a room.  I checked into an unassuming hotel, and asked about a place to eat.  I ended up a few doors down in a 100-year-old hotel  and proceeded to the bar for a before dinner drink.  In the mostly-empty bar, I asked the barmaid for a dinner recommendation.  She was very pleasant and engaged me in conversation from which she discovered I was from California, was a cowboy folk artist and furniture builder, and would be driving back to Cody in the morning.
She said she'd like to see my cowboy furniture, so I walked back to my room, returning with a photo album I always carried for just such opportunities.  I ordered dinner and a second drink, then noticed the bar was filling up with locals, and my photo album was working its way from table to table.
To make a long story short, the bartender told me that the other patrons were all county commissioners and had just concluded their monthly meeting.  Pretty soon, as a nod to their enjoyment of viewing my furniture,  I had several glasses of whiskey and water lined up in front of me.
I drove back to Cody the next day.  I always will have fond memories of my visit to the cowtown of Miles City, Montana.
Posted by Drifting Cowboy at 8:15 AM