Meanwhile back at the ranch -- lower Iverson miscellaneous

Before I move on to the "Rock Stars" on the upper Iverson Ranch I need to clean up some loose ends on the lower Iverson.  In this post I'll show you Phantom Rock, Hawk Rock, Rock Island, and Jaunty Sailor Rock. 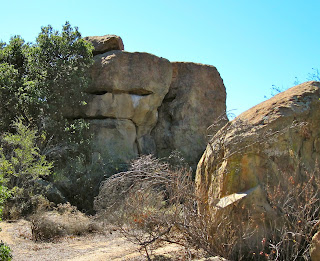 Phantom Rock is located immediately west of Sphinx Rock (the western most pinnacle) in the Garden of the Gods formation.  It's another background formation that shows up in dozens of Westerns like Ghost Town Gold (1936), Law of the Canyon (1947), Taming of the West (1939) and The Miracle Rider (1935). 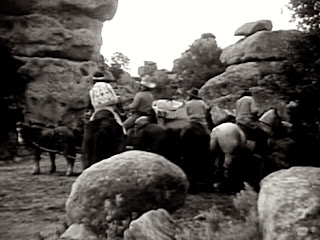 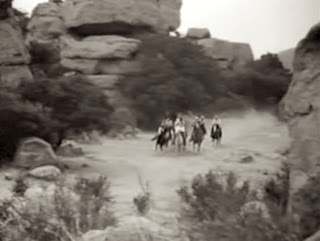 Phantom Rock in the screenshot above--from a scene in Charles Starrett's Law of the Canyon (1947)--is right of center above the hind most rider.  The rock left of center is Sphinx Rock. 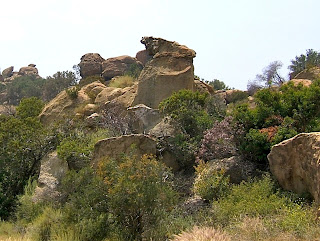 Hawk Rock is just south of the trail that leads to the Garden of the Gods formation (just west of Redmesa Road).  It shows up in The Miracle Rider (1935), Pony Post (1940) and many other Westerns and serials. 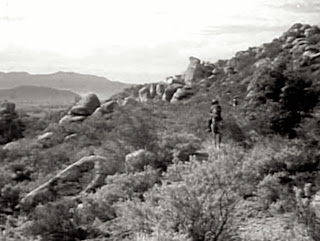 In the screenshot above from The Miracle Rider (1935) Hawk Rock is right of center, above and to the left of the rider.


Rock Island is essentially a lost formation with only a few remnants left.  Today it is hidden in a corner of the recreation area on the east side of the Cal-West Townhomes development.  You can see it in The 30 Foot Bride of Candy Rock (1959), They Died with Their Boots On (1941) and The Fighting Seabees (1944) just to mention a few. 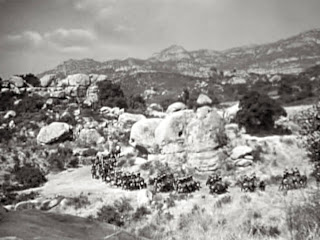 Filmed at greater distance we see Rock Island (screenshot above) as it appeared in They Died with Their Boots On (1941). 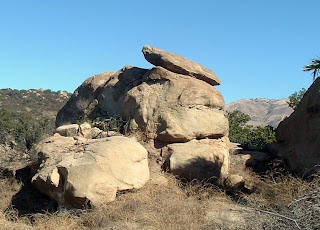 Jaunty Sailor Rock (photo above) was named by Dennis Liff, my friend and fellow Iverson blogger (http://iversonmovieranch.blogspot.com/).  I've spotted it in two Wild Bill Elliott oaters The Son of Davy Crockett (1941) and The Taming of the West (1939), but I'm sure it's in many others as well. 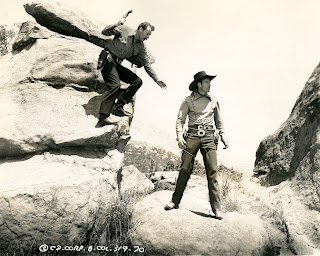 The movie still above is from a scene in The Taming of the West (1939) -- my favorite "Wild Bill Elliott" movie.

Tilt-a-Table Rock in the photo at the top of this post is one I have not yet located in film, so please let me know if you find it in a movie or TV show :-)