Meanwhile back at the ranch -- lower Iverson Ranch overview 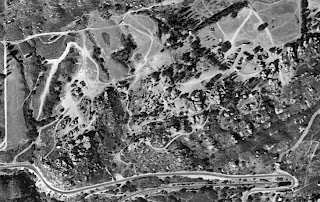 We'll start our overview of the "Iower Iverson Ranch" with a look at the 1950s aerial photo above.  Starting at the top center (moving clockwise) I'll describe the features that once existed on the ranch.  The heavily treed area at the top center was the residences of the Iverson brothers.  Aaron's home was demolished when the freeway was built, but Joe's house (further south) still remains.

East of the Western street you can make out a horseshoe shaped corral.  East of the corral was the Cave Rocks area which included Lash's Archway, Split Rock, Hook Rock, Cave Rock and others.  In fact, if you look at the third panel from the left (photo above), the rock--left of center--is Hook Rock.

Going back to the aerial photo, the area south of the corral is the Grove (it still exists).  South and west of the Grove were the Southern Chase Roads which included Vultura's Pass, Outlaw Pass, Hangover Rock and Karl and Augusta's place (aka the old folks home) which was lost to a fire in 2008.

West of the Southern Chase Roads (south of the Iverson residences) was Zorro's Cave, Bill Rock, Bulldog Bluff, Hole in the Wall.  There was also a narrow flat canyon (with Overhang Rock and others) that was lost when the Cal-West Townhomes were built.

Traveling west from Hole in the Wall you'd find Nyoka Cliff and beyond that (further west) was the Iverson Gorge.  To the west of the gorge (very difficult to see on the aerial photo) was the Garden of the Gods area which included Overlook Point, Garden of the Gods, Phantom Rock, Keaton's Bathtub, Saddle Rock, Saddlehorn Rock and others.

North of Garden of the Gods there was a stagecoach relay station and barn. 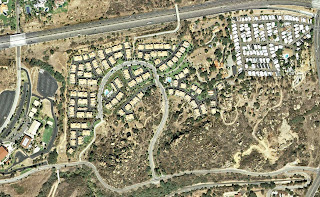 The photo above is a look at the lower ranch area today.  As you can see the Ronald Reagan freeway cut through the ranch just north of the Western street area which was located in today's Indian Hills Mobile Home Village (top right corner).

The tan colored roofs (center left) are the Cal-West Townhomes.  Find the big hair-pin curved road to the left center of the photo--the open space south of the condominiums inside the hair-pin road is the Garden of the Gods.  Further west is Rocky Peak Church.  Northeast of the Garden of the Gods (within the town home development) is Three Ages Rock, Crown Rock and Devil's Doorway.

I'll leave off with a look at Chatsworth from Overlook Point as seen above in a series of screenshots captured from Law of the Ranger (1937).

Posted by Drifting Cowboy at 7:32 AM