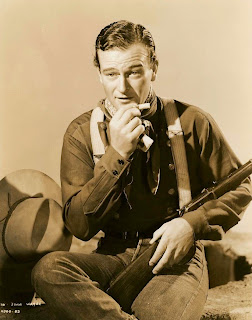 Stagecoach (1939) is an epic Western story directed by John Ford, and starring Claire Trevor and John Wayne (in his breakthrough role). 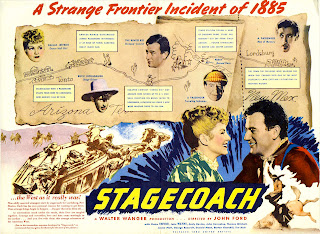 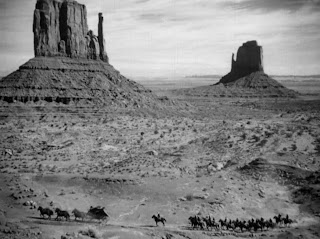 In the film Ford skillfully blends scenes of Monument Valley (which would become a signature for him) with scenes filmed at Iverson Movie Ranch in Chatsworth, and other southern California locations (photo above courtesy of Bruce Hickey). 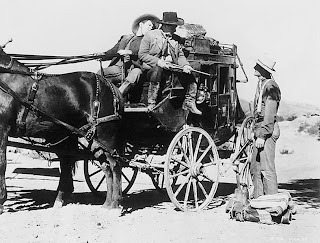 Few people know that John Wayne's introduction in Stagecoach--where he boards the Stage as the Ringo Kid (photo above)--takes place directly in front of the Garden of the Gods (the best known rock feature on Chatsworth's Iverson Ranch). 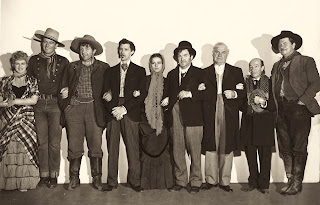 Ford defines the relationships and draws out tension between characters with an extraordinary cast including (left to right in the photo above):

Dallas (Claire Trevor), a dance hall girl driven out of town by intolerant members of the "Law and Order League."

Ringo Kid (John Wayne), a fugitive hunting outlaw Luke Plummer to avenge the deaths of his father and brother.

Henry Gatewood, (Berton Churchill), a banker absconding with $50,000 he embezzled from his bank. 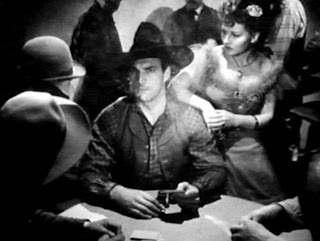 Luke Plummer (Tom Tyler)(photo above), a killer and outlaw hiding in Lordsburg. 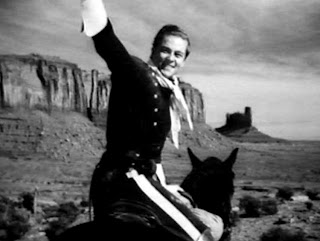 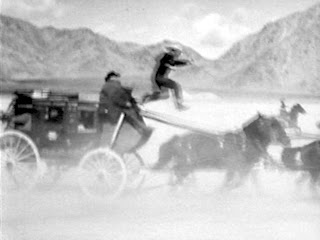 Stagecoach features some of the most daring stunts ever filmed with the legendary Yakima Canutt.  In the photo above he is doubling Wayne as he performs his famous 'transfer stunt' (jumping onto a team of running horses). 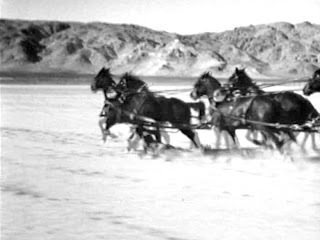 Yakima Canutt's 'drop stunt' (falling between horses and being dragged under the stagecoach). 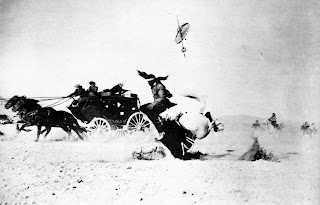 Extraordinary stunt scenes included falls caused by the 'Running W', a contraption that brings down a galloping horse by attaching a wire, anchored to the ground, to its fetlocks.  It launches the rider forward in a spectacular fashion.  It was invented by Yakima Canutt, but is now outlawed because so many horses killed or injured with its use. 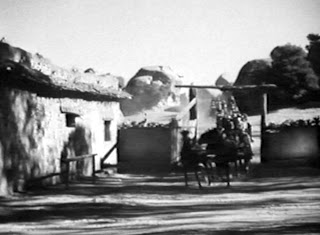 From an Iverson Ranch movie historian's point of view it doesn't get much better than the splendid scenes with Hook Rock as the stagecoach arrives at the Dry Fork station (screenshot above). 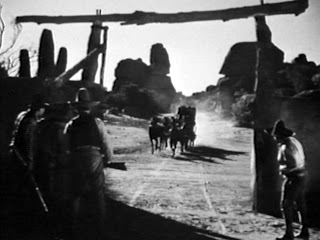 The arrival of the stagecoach at the Apache Wells station with the Garden of the Gods in the background is nothing short of spectacular (screenshot above). 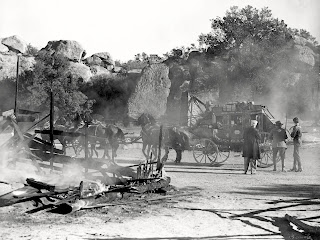 Finding the stagecoach station burned out at Lee's Ferry with Batman Rock at the far left.

The eventual meeting between the Ringo Kid and Luke Plummer in Lordsburg leads to a classic main street shootout.  The drama leading to the face down begins when Plummer draws Aces and Eights (the dead man's hand) in a card game, and escalates when Doc Boone demands Plummer not carry a scattergun into the fight. 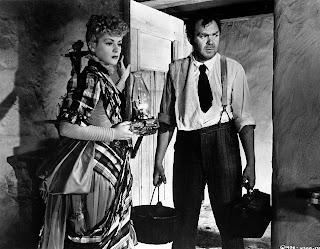 If you've never seen Stagecoach (1939) it is a must see.  It's my personal all-time favorite Western.  It stars my favorite silverscreen hero John Wayne, and was directed by John Ford (the best director ever in my opinion).