Meanwhile back at the ranch -- Medicine Rocks 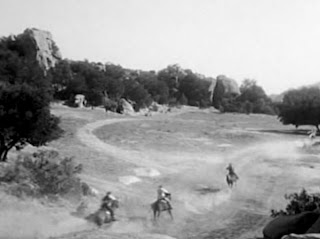 The screen capture above (from an unknown Western) was shot from Lookout Point looking southwest.  As you can see one chase road ran southwest forming a semicircle.  At the mid-point of the semicircle you see Medicine Rocks.  Location expert Tinsley Yarbrough refers to the formation as Prominent Rocks, but I like Medicine Rocks as they were called in an old B-Western.  They are the tallest formation at the top left of the screenshot. 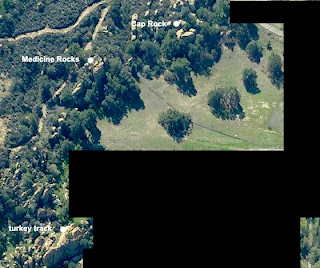 In this 2010 photo I've identified several formations as they appear today.  The "turkey track" is actually the location of Lookout Point and the Upper Iverson Cliff.  Cap Rock was often the beginning or end of short chase scenes (depending on the direction of travel).  I'll tell you more about Cap Rock in a future post.  You'll notice that a trail leads up the ridge to the left of Medicine Rocks; in The Golden Stallion (1949) outlaws used it to escape from Roy and Trigger. 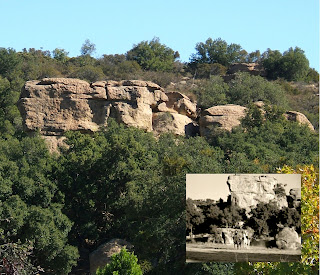 The photo above gives you a look at Medicine Rocks today.  The inset shows you how the formation appeared in the late 1940s.  As you can see oak tree growth has nearly blocked the view of Medicine Rocks. 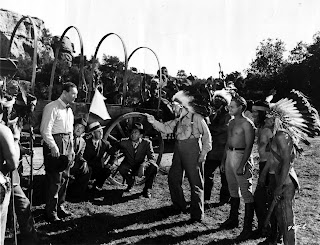 In the still above--from a scene in Grandpa Goes to Town (1940)--Medicine Rock (top left) has become a dramatic backdrop for a break in the action.  You'll often see stagecoach holdups, wagon camps, or bad guys being captured in front of Medicine Rocks. 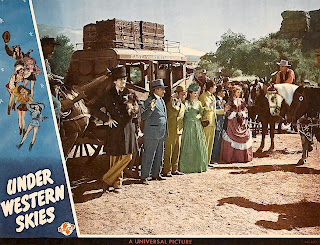 The lobby card photo above from Under Western Skies (1944) gives you a good example of a stagecoach holdup with Medicine Rocks off to the right. 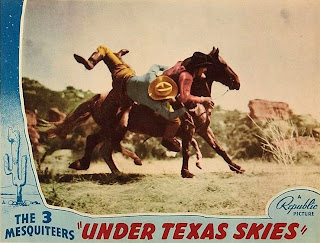 Another lobby card photo above from Under Texas Skies (1940) shows us an example of a capturing bad guy with Medicine Rocks off to the right. 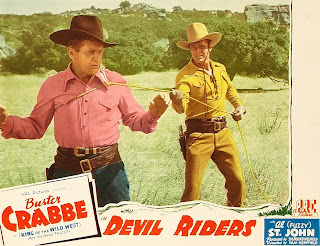 Another The lobby card photo above from Devil Riders (1943) shows us another example of a capturing bad guy with Medicine Rocks off to the right. 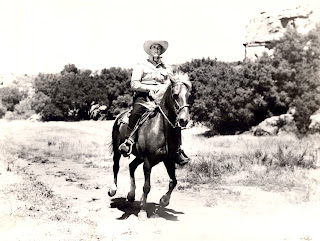 However, every once in a while a cowboy hero--like Charles Starrett--just gallops past Medicine Rocks as in the still above from Quick on the Trigger (1948). 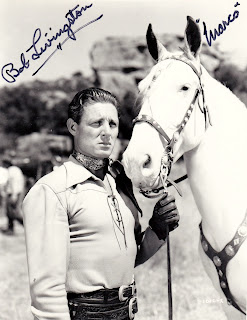 Actors like Robert Livingston (above) liked to have their photo taken with significant rock stars in the background.  Yup!  That's Medicine Rocks behind Bob and his horse Marco (photo courtesy of Bruce Hickey).