Meanwhile back at the ranch -- Gorge Cabin 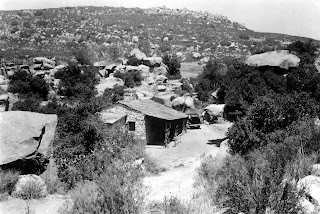 In the Iverson gorge--which was located between Nyoka Cliff and the Garden of the Gods--there was a stone cabin.  Researchers say it was dismantled sometime in the late 1940s and moved to the upper ranch, but it appeared in plenty of B-Westerns and serials during the late 1930s and early 1940s.  The still above is probably from the Republic serial Batman (1943) starring Lewis Wilson, Douglas Croft and J. Carrol Naish. 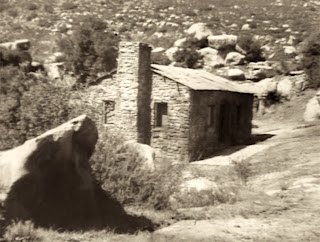 Over a two year period the 'Gorge Cabin' (as it came to be known) evolved from a simple rectangular outlaw cabin as seen above in a screen capture above from Tim McCoy's Phantom Ranger (1938) to a more elaborate homestead cabin.  The cabin also appeared in this form in The Lone Ranger (1938). 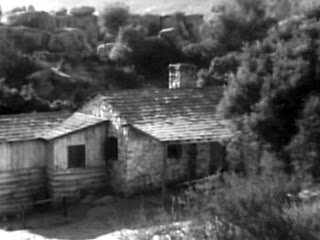 By 1940 when they filmed Bob Steele's Billy the Kid in Texas the cabin had a porch across the front and a lean-to had been added to the south end.  Fellow researched Bill Sasser alerted me to the fact that this screenshot shows Potato Rock at the top left center, and helps identify just where in the gorge the cabin had been located.

In the screen capture above from a scene in Wild Bill Elliott's The Son of Davy Crockett (1941) we get a good look at the porch across the Gorge Cabin. 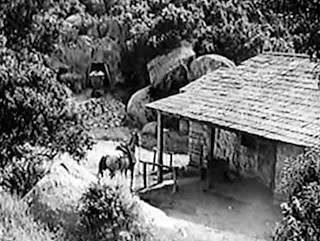 When filmed from a different angle (further northwest) as in the screenshot above from Adventures of Red Ryder (1940) you will see a false mine and fake archway next to the cabin.  See my post about Iverson Archways http://a-drifting-cowboy.blogspot.com/2012/04/meanwhile-back-at-ranch-iverson.html for more about the Gorge Archway. 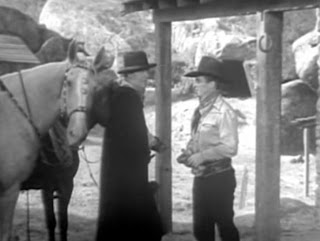 Above is another look at the false mine in a screenshot from Outlaws of Boulder Pass (1942) starring George Houston and Al St. John. 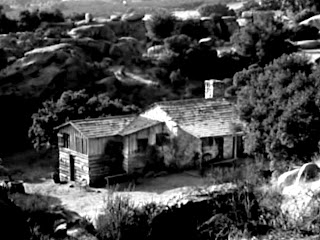 Above is a last look at the Gorge Cabin in an out-take from Charles Starrett's Riders of the Badlands (1941).  The cabin also turns up in Hands Across the Rockies (1941) and Ride 'Em Cowboy (1942).


Posted by Drifting Cowboy at 9:02 AM