Meanwhile back at the ranch -- Festival Rocks 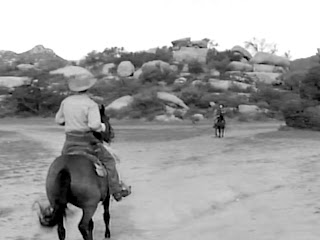 In the extreme northwest corner of the upper Iverson Ranch there is a lonely rock pile that I've dubbed Festival Rocks.  I first found them (on film) in an old Ken Curtis serial Don Daredevil Rides Again (1951).  I can't find my original notes, so I have no way of knowing why I called them Festival Rocks.  There must have been something about a festival in the serial, but I am not going to spend time watching that very dull oater again :-) 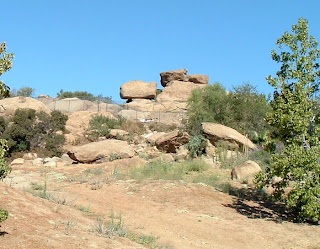 The 2008 photo above was taken while I was exploring rock formations on the upper Iverson (Indian Hills today).  Today it is literally located in a private backyard, but the most interesting rock formation (seen in movies) is missing :-(  It would have been just to the right out of the frame. 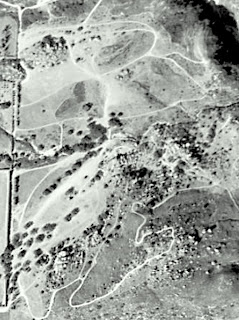 In this early 1950s photo (above) you'll find Festival Rocks in the top left cover. 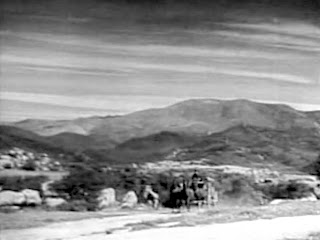 Above is a screen capture from an unknown B-Western.  In it you can see Festival Rocks at the far left edge just below center.  The photo was taken on the north end of the insert road. 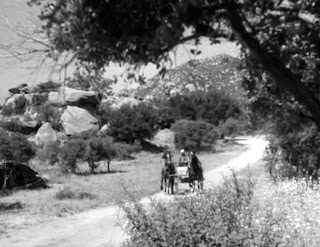 The screenshot above from a scene in Bud Abbott's and Lou Costello's The Wistful Widow of Wagon Gap (1947) gives you a view of Festival Rocks from the north looking southwest. 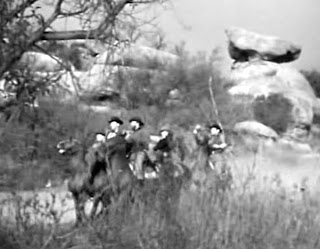 The screenshot above from Gene Autry's Apache Country (1952) gives you a good look and the missing formation.  For me it's the best way to identify Festival Rocks in a movie.

Here's another look at the missing formation in a screen capture from a Cisco Kid oater The Gay Amigo (1949). 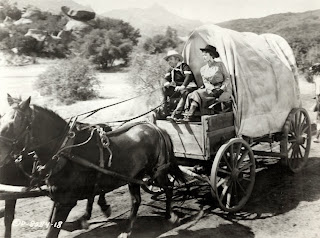 Above is a publicity still for The Gun That Won the West (1955) also showing the missing formation.  Aren't bulldozers wonder? 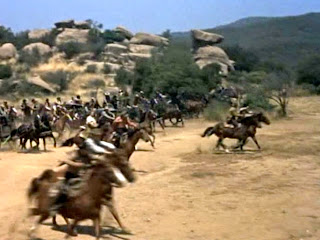 This final screen capture is from Randolph Scott's Tall Man Riding (1955) and gives you a look at Festival Rocks in glorious color.