Meanwhile back at the ranch -- Eagle Beak and The Molars 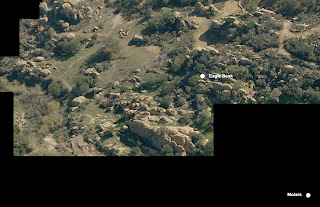 Two interesting rock formations that are often seen aligned in B-Western chase scenes are "Eagle Beak" and "The Molars."   They both still exist, but The Molars are in a planter area of a private estate.  The photo above gives you a rough idea of their location.  Both formations are located south of the Upper Iverson Cliff.  Eagle Beak actually sits back a bit further east of the ridge line containing the unique rocks we've been examining in the past few posts. 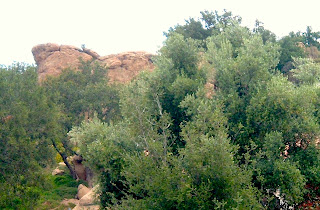 The photo above is a close up view of Eagle Beak as it appears today.  It is high up on a ridge line above a terraced backyard of a neighboring estate (next to the home with The Molars in a planter). 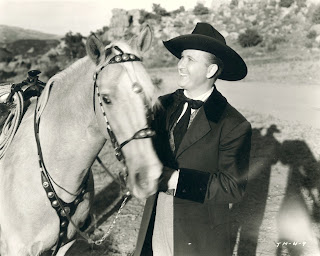 The photo above is a still from an unknown Tim McCoy movie (circa 1940).  Eagle Beak is directly above the horse's head. 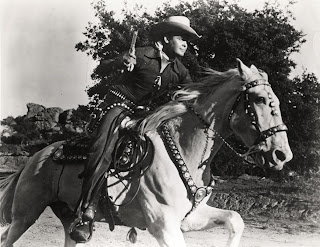 Here's another look at Eagle Beak in a scene from Sheriff of Cimarron (1945) (starring Sunset Carson and his horse Cactus).  Eagle Beak is at the far left center of the photo.

In the still above from a scene in The Last Musketeer (1952) we'll introduce The Molars.  They are at the far left center of the photo with an oak tree behind them. 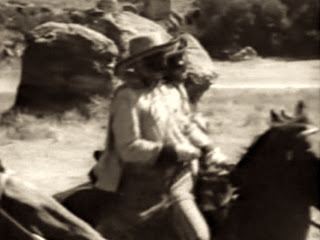 The screen capture above from a scene in Zorro's Fighting Legion (1939) gives you a close up look at The Molars.  The shadows in this photo show just why the formation is called The Molars (do you see three teeth?). 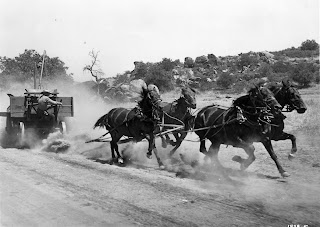 At the top of this post I mentioned seeing Eagle Beak and The Molars aligned in chase scenes.  The still above from Spoilers of the Plains (1951) gives you a good look at that alignment.  Once you've spotted it in film you'll see it again and again. 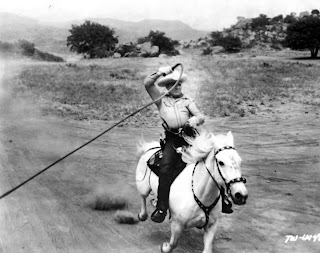 The still above from Silver Raiders (1950) gives you another look at The Molars (above Whip Wilson) and Eagle Beak on the ridge line (top right). 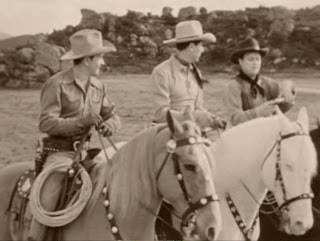 The screenshot above from Prairie Pioneers (1941) – starring Bob Steele, Robert Livingston and Rufe Davis – once again illustrates the alignment of The Molars (just over Bob Steele’s right shoulder) and Eagle Beak (above his hat).