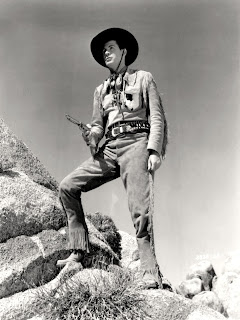 Jack Randall (1906-1945) was an American singing cowboy star whose career was greatly over shadowed by that of his brother Robert Livingston.  Prior to entering films he acted and sang on Broadway.

In 1937 Monogram Pictures signed him to make a series of singing cowboy films.  After a few poorly received musical Westerns, Randall continued playing leads in B-Westerns, but not as a singer.  His career rapidly declined, so he moved into supporting parts and villain roles.

At the age of 39, he died as the result of an equestrian accident while shooting a riding scene for The Royal Mounted Rides Again (1945).

Corriganville, CA – Jul 16, 1945 – “JACK RANDALL KILLED IN HORSE ACCIDENT”
On the first day of filming at Corrigan’s Ranch for Universal’s The Royal Mounted Rides Again (1945), Jack Randall was killed in a fall from his horse. During the third attempt to get a clean shot of a running insert, at the end of the run a piece of paper blew in front of Jack’s horse, causing it to spook and bolt to the left, throwing Randall into a tree. He hit his head and died instantly. 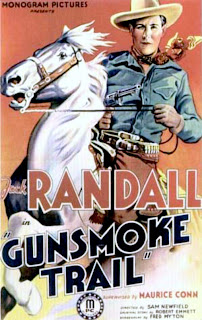 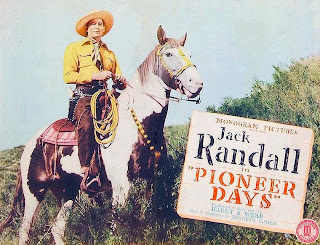 Index for 'Reel Cowboys of the Santa Susanas' -- Chatsworth's Six-Gun Heroes
http://a-drifting-cowboy.blogspot.com/2012/05/reel-cowboys-chatsworths-six-gun-heroes.html
Posted by Drifting Cowboy at 8:36 AM