About a dozen years ago,  while I was watching an old Western on television, my wife asked, "Is that Chatsworth?" She was referring to a chase scene with good guys chasing bad guys as they galloped along a rocky ridge line.  "I think so," was my reply, but it could have been Corriganville or even Lone Pine.  They all looked pretty much the same to me.  I think that exchange might have been the starting point of my quest to identify filming locations in Chatsworth, California.
After many years of research and collecting memorabilia, I wrote a book titled Reel Cowboys of the Santa Susanas (published in 2008).  Before the ink was dry on the first press release for the book, I started hearing from other B-Westerns movie historians.  During the next two years through exchanges with new-found friends, my knowledge of Chatsworth filming locations doubled. 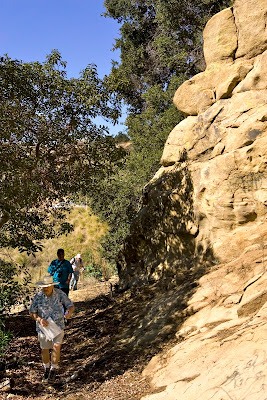 (photo above) Jerry England (front) with new friends and fellow B-Western movie historians Bill Sasser (middle), and Dennis Liff (rear) hiking in the Iverson gorge on the lower Iverson Ranch during the summer of 2010.
When my fellow Iverson Movie Location Ranch researchers are gone it's unlikely anyone will know or even care about the fantastic movies and television shows filmed in Chatsworth, California.
Hats off to folks like Bill Sasser, who is a board member and Director-At-Large of the Williamsburg Classic Film Guild, Inc. which for many years has presented the annual Williamsburg Film Festival for many years.  Learn more about the festival at http://wff5.tripod.com/
You may have seen Dennis Liff's research on his blog at http://iversonmovieranch.blogspot.com/
And finally, Tinsley E. Yarbrough, Professor Emeritus in the Department of Political Science at East Carolina University, has written about movie locations for many years in Boyd Mager's Western Clippings.  He recently authored Those Great Western Movie Locations, a 365-page hardback with approximately 400 stills and information on more than 100 filming sites.  See http://thosegreatwesternmovielocations.com/
Tinsley is also the author of nine books on American jurisprudence.
To learn more about the Iverson Movie Location Ranch see my post at http://a-drifting-cowboy.blogspot.com/2011/11/primer-on-iverson-movie-ranch.html

Posted by Drifting Cowboy at 6:08 PM