After the 2002 San Fernando Valley bid to secede from Los Angeles was lost, savvy politicians with connections to the Valley reached out to their disenfranchised citizens to once again win their support.
The City of Los Angeles established neighborhood councils to give citizens an open forum for public discussion of issues concerning their community and to facilitate communication between the City of Los Angeles and community stakeholders.
In 2004, I ran for the Chatsworth Neighborhood Council, and won a seat on its first elected board.  Within weeks I organized the equestrian and land-use committees, and was elected chairman for both of them.  I established the Chatsworth Day of the Horse (DOTH) and Equestrian Safety Month to promote a better understanding of horses, and the need for motorists to slow down and share the road.  The idea was simple:  We would have a community event--Chatsworth Day of the Horse (DOTH)-- that would give non-equestrians a chance to see up close horses, their riders, and some equestrian skills.  Equestrian Safety Month would be the month preceding the DOTH, and free yard-signs advising motorists to "slow down, and pass wide" would be distributed to the community to put in their front yards.  To get school children to help carry the message to their parents, we also sponsored a horse- safety poster contest with cash prizes and awards to be presented at the Chatsworth Day of the Horse. 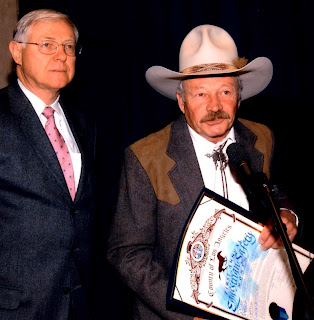 Los Angeles County Supervisor Michael Antononvich saw the merits of my Equestrian Safety Month idea and in 2004 proclaimed the month of April as "Equestrian Safety Month" throughout the County of Los Angeles  to encourage safety and to educate motorists and equestrians about the rules of the road to prevent accidents and injuries where cars and horses cross paths. 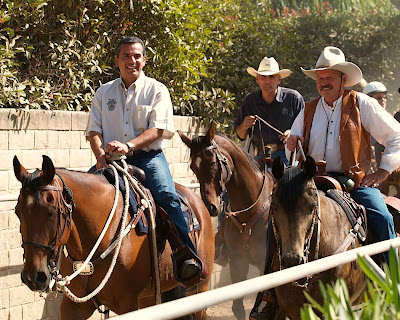 Then mayoral candidate Antonio Villaraigosa came to the second Day of the Horse (2004) to make a campaign speech.  Later, keeping his campaign promise to me, Los Angeles Mayor Antonio Villaraigosa came to Chatsworth in September, 2005, to go for a horseback ride to see firsthand our priceless heritage of horse-keeping, equestrian trails and open space that we had been fighting to preserve. 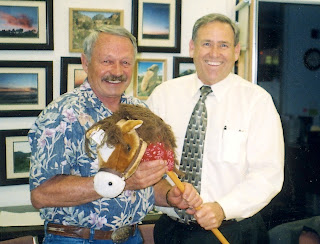 Councilman Greig Smith won election in 2003, and became a stedfast friend to Chatsworth's equestrians.  In 2004, when I had shoulder surgery to repair a ruptured tendon, Greig presented me with a 'gentle horse' to ride until my doctor released me to get back on my horses.  Councilman Smith was instrumental in acquiring Stoney Point Ranch, a private boarding facility, that otherwise would have become just one more housing tract.  Instead it is now a city-owned horse ranch and is part of the city's park system. 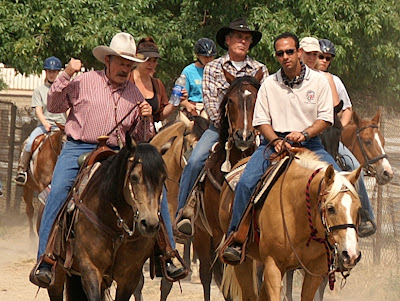 Afterword -- almost a decade later...
Greig Smith's longtime Chief of Staff and also my friend, Mitchell Englander (on the palomino horse above) was elected to the Los Angeles City Council in 2011.  I know Mitch will continue to help fight to protect horse-keeping in Chatsworth.  As for me I left the neighborhood council in 2007, and spent the next three years writing two books about Chatsworth's movie-location history.  Today I lecture and sell my books at various community events.  To learn more please visit http://www.cowboyup.com/
Councilman Smith, Mitchell Englander, and I worked to create a Share the Road sign campaign to make our streets safer for motorists, horses and riders.  See the "Ride Safe" video on YouTube http://youtu.be/3-ejyRTYPvw