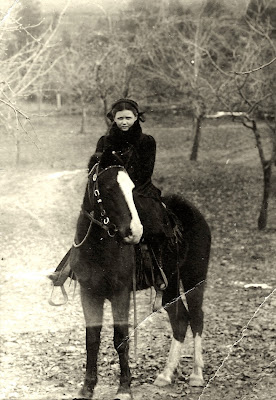 Jackson Bailey's daughters might not have been rodeo cowgirls, but they were no strangers to horses.  The photo above is Clara Bailey riding her dad's saddle horse about 1913.  No need to adjust the stirrups, just shove your feet into the stirrup leathers,  giddy-up and go. 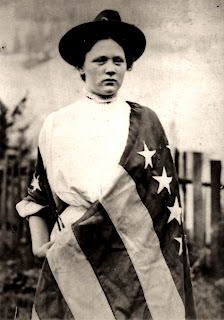 The photo above, taken during World War I, is of Meda Bailey wearing her big brother's campaign hat while wrapped in the "Stars and Stripes." The Baileys were a patriotic lot who knew that their very own ancestors had fought the Civil War and Revolutionary War to guarantee their liberty.  Two of Jackson's sons, my granddad and his brother David, joined the Montana Militia just in case. 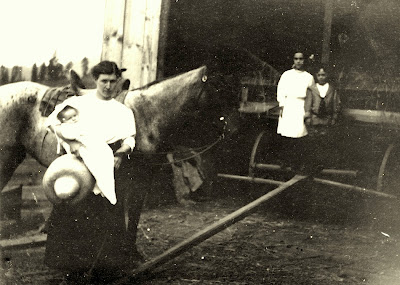 The photo above is a 1920s postcard from one of granddad's sisters-in-law (I'm not sure which one).  Those pioneer ladies had no trouble riding a saddle horse while carrying an infant in their arms. 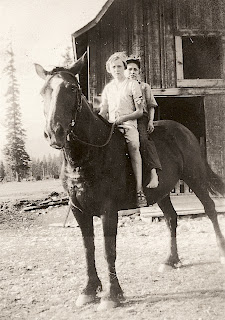 Here's another 1928 photo.  This one is my aunt Hazel and a cousin riding one of Grandpa Brown's horses in Creston, Montana.  Now that they're all gone, I can freely admit that Hazel was my favorite aunt.  She was a real trooper who could hunt and fish with the best of 'em.
Posted by Drifting Cowboy at 1:57 PM