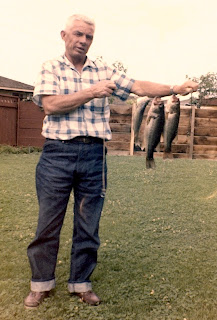 When my dad was living in Sacramento, California in the 1960s, he spent a lot of time bass-fishing at nearby Folsom Lake.  He liked to troll "Whopper Stopper" and "Bomber" lures, and he often came home with some nice fish.  I fished with him a few times back then, but it was usually so I could do some water skiing first. 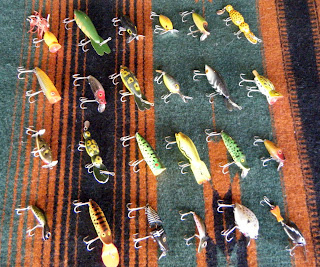 When dad passed away I inherited his tackle boxes.  Over the years I've combined his lures with mine.  I snapped the photo (above) of some of the older lures in my tackle boxes.  I'm pretty  sure one or two of these are collectible. 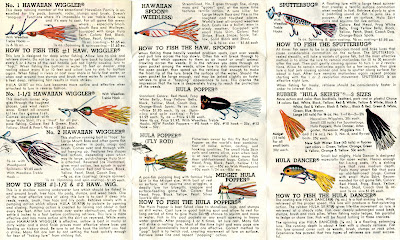 Wow!  Can you believe the prices in this 1970s Arbogast pocket catalog (above)?  I've got a tackle box full of Arbogast lures because they work.
I'm more of a trout fisherman than a bass guy, but I gotta tell you fishing for bass on the surface just before dark is pretty exciting stuff.  My favorite bass lure is the hula popper.  Just cast it to a likely-looking spot and let it sit until the hula skirt flexes.  Then retrieve it really slow, stop, and with a quick jerk on the line pop the lure.  Watch for the dorsal fin breaking the surface just before the strike.  It doesn't get a lot more exciting, except maybe a big cutthroat tail walking on the water :-)
Posted by Drifting Cowboy at 6:10 PM