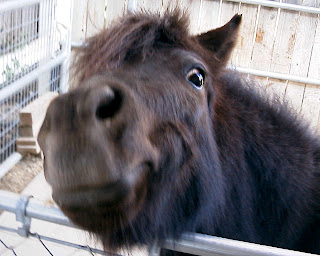 For the past 400 years, paintings by European artists have left us ample proof that little horses had been bred as pets for the children of royalty.  Historical records also suggest small horses were often present in the courts of Europe as popular curiosities.  King Louis XIV of France kept a zoo with all sorts of unusual animals, including tiny horses.  As the popularity of the miniature horse grew, they gained distinction as eager performers in traveling circuses.  The true origin of these little horses is still debated, and the exact origin may never be known; however, because of their heavy shaggy coats, some folks believe they may have originated from small icelandic horses, where weather conditions are cold and harsh.  By the 1950s there were all sorts of small horse breeds around the world, including the Miniature Shetland Pony, the Miniature Toy Horse and the Midget Pony.
Wherever they originated, eventually miniature horses became useful as working horses in the coal mines of Great Britain where they were called "pit ponies."  During the 1800s pit ponies were often imported to the United States to work in Appalachian coal mines.  By the 1970s, with the coal-mining days over, breeders refined miniature horses and began using them to drive pleasure carts.  In 1978 the American Miniature Horse Association (AMHA) was formed to adopt a standard for the breed, maintain a stud book, and keep a registry.  Today, the AMHA has nearly 150,000 registered horses.  Adult miniature horses under 34" at the withers are considered "A" division miniature horses.  Those over 34"up to and including 38", are considered "B" division miniature horses. 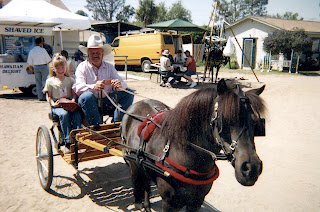 My little horse is Biggs, short for "Big Enough."  He's a "B" miniature horse that stands 38" when his hooves are freshly trimmed.  He has participated in several Chatsworth Day of the Horse events, and he loves giving children cart rides. 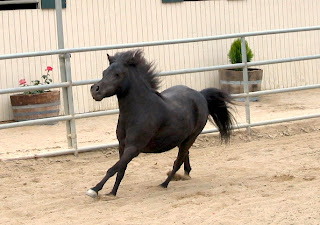 Biggs is also a bit of a ham and was an eager performer during his own liberty class at a show in 2004. In 2007 Biggs (with driver Eddie Montano, age about 10) pulled this covered wagon for the entire length of the Chatsworth Holiday Parade. 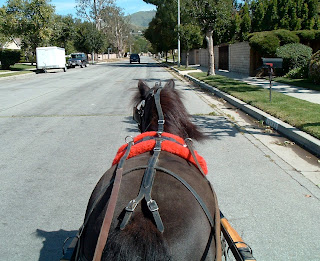 If you see us on the road, please give us a break and pass us carefully.  We are always courteous and try to stay to the right, out of the way of traffic.  In California horses (all sizes) still have the right-of-way over vehicles, but most folks don't know that.
Posted by Drifting Cowboy at 2:24 PM