Cowboy Legacy -- Great-grandsons of the West 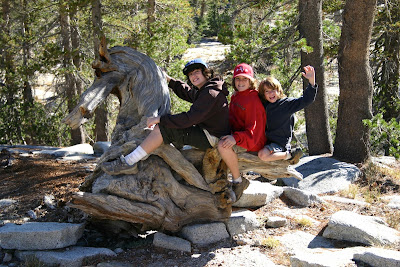 The photo above was taken a few short years back in Yellowstone National Park.  My grandsons are riding a magical wooden horse. 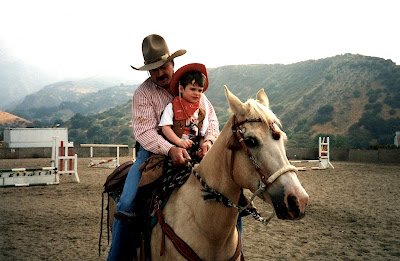 The 1997 photo above was Ryan's first ride.  I'm not sure who was more nervous--Ryan or poor ol' Sunup!  It was a typical foggy fall morning way up in Browns Canyon.  Today Ryan is one heck of a good baseball player.  I'm hoping it gets him into college. 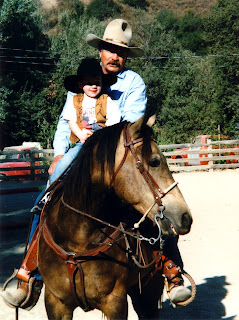 Next to get his first ride--a couple of years later--was "middle grandson" Kevin (above) about 1999.  This photo inspired one of my early paintings of Joyce's horse Cash.
I made each of the boys a stick-horse, and I believe they put plenty of miles on 'em. 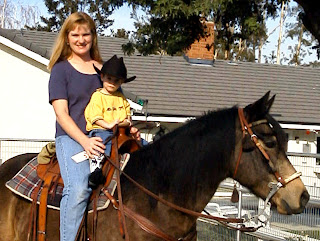 Poor little Ian my "youngest grandson" only got a quick spin around the corral for his first ride.  My daughter-in-law spent a lot of time with horses when she was growing up, and I know she'd love to ride again, but raising three active boys is a tall order for anyone. 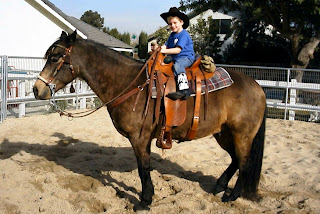 Ya gotta admit Kevin (above) looks mighty Western in the cowboy boots and hat I bought for all the boys that Christmas.  Today he's a starting linebacker on his freshman football team.

One of my favorite accomplishments in life was building this cradle (above) with its whimsical forest scenes.  All three grandsons slept in it the first few months of their lives. 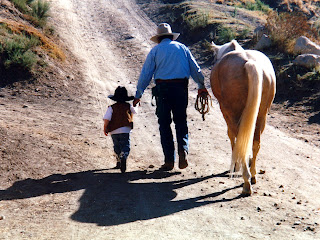 The boys are growing up way too fast, and the sunset is getting way too near for me.  I try to go to some of the baseball, soccer, and football games that take the place of riding horses for modern kids.  Adios for now from "Cowboy Granddad."
Posted by Drifting Cowboy at 12:50 PM