I'll never forget the first time I saw the river.  It was 1957.  My dad was building our new home in Oakhurst, a sparsely populated community--of about 357 people--in California's High Sierras.  I had been helping dad frame the new house, and on a day when he didn't need me, I decided to explore our new neighborhood.  From our home site, I could see a line of trees about 300 yards away on the other side of the highway, so I took my dog King and started hiking downhill toward them.

King and I crossed the highway, climbed through a barbed wire fence, and continued downhill across an open field to a beautiful grove of cedar trees.  King was still a pup, not quite two years old.  As soon as he saw the river on the far side of the the cedar trees he rushed head long into the water.  When he hit the water he stopped short, and tried to balance on two legs rather than put a third paw in that icy cold water.  It was the funniest thing I had ever seen a dog do.  As soon as King gathered his wits, he quickly turned and bounded back to me.  That was the last time King tried to cross the river.

To me that river was a wonderland.  In the mud under the cedar trees, there were all sorts of animal tracks.  I identified deer, raccoon, coyote, squirrel and rabbit tracks; and there were many different kinds of bird impressions.  That afternoon King and I explored the river.  There were no homes or any other sign of human inhabitants for more than a half mile upstream or down.   As a 15-year-old who was keenly interested in outdoor life, this river would be my very own wilderness, my private place to hunt and fish.  And it was practically in my front yard!

The Fresno River (as I soon learned its name) wasn't very big.  It was narrow and shallow--except for a few deeper pools--and it was cold water that originated somewhere in Yosemite park a few miles to the north.  The river tumbled downhill, carved its way through canyons in Oakhurst, then turned toward Ahwahnee, and eventually dropped down to leveler cow country somewhere beyond Raymond.  My section of the river had relatively slow water compared to upstream, where it cascaded from higher elevations.

On the other side of the river was a large meadow that at one time must have been a pasture for horses or cattle or both because there was a decaying old barn on the edge of that grassland.  Wandering down stream and rounding a bend, I found a small waterfall, and below it, a long pool of slow water that soon became my favorite swimming hole.

Upstream a few hundred yards was a bend in the river, and at the bottom of the bend was a huge granite boulder about ten feet in diameter.  To one side of the boulder was a deep pool, which always produced at least one good-sized trout.  If I wanted a trout dinner all I had to do was hike down to that boulder, toss my line in the water, and in a few minutes, I'd nearly always have dinner.

Somewhere (maybe it was Boy's Life magazine) I had read about fur trapping and traps.  I constructed a wooden box trap with the intent of catching a raccoon.  Maybe I could make a pet of one, or maybe I was just thinking of having my own "Davy Crockett" fur cap.  I built my box trap and selected a grassy area under the biggest cedar tree on my portion of the river.  I placed my trap with great care, trying to leave as little human scent as possible.  I checked the trap daily. After about a week, I found clear evidence that the trap had been sprung by a raccoon, but he had apparently simply lifted the drop-down door and let himself out.  Undeterred, I reset the trap, and within a few more days I found a very angry gray fox in my trap.  The fox had been clawing at the hardware cloth in the end of my trap and already could get a paw through it. 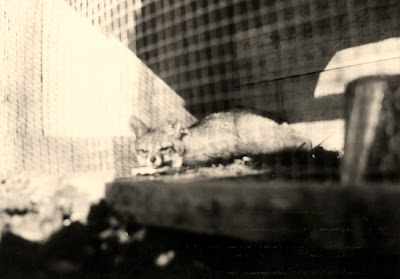 I dragged the box trap with its captive fox home.  It was the longest 300 yards I had ever hiked with that fox snarling and growling every step of the way.  When I got home dad helped me build a cage for the fox.  I wrote a letter to the Fresno zoo offering to make them a present of my prize fox.  In a few days I received a reply from the zoo.  It seemed they had no shortage of gray foxes and suggested I turn him loose.  I did, but that rascal returned every few days for months to visit the strange place where he had been confined and fed raw hamburger.

As of 2010 the population of Oakhurst is approaching 13,000 people.  The barn in the meadow is long gone and has been replaced by a school.

Posted by Drifting Cowboy at 7:48 AM