Annie McNeil, my grandmother, was of Scotch-Irish descent.  Her mother's grandparents emigrated from Ireland to Canada in the 1830s.  Her father's grandparents emigrated from Scotland in the 1810s.
She was born in Sarnia, Ontario, Canada, just a few miles north of Detroit, Michigan.
Irish families -- Proctor, Anderson, Sturdy, and Shaw
Robert Proctor, Annie’s great grandfather, was born about 1796 in Freshford, County Kilkenny, Ireland. 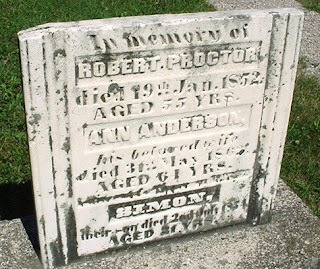 
Hugh Sturdy emigrated from Ireland about 1830 and settled on Lots 30 and 31, Concession 11 just south of Holmesville in Goderich Twp., Huron Co., Ontario, Canada.


According to a family record, he came from Ballyconnell, Co Caven and was one of the seven children of John Sturdy.  His brother, Richard (born 1810), emigrated to the United States in 1831.  Hugh married Elizabeth Shaw in Ireland and they emigrated with at least two of their nine children: John, Oswald, Robert, Anne, Ellen, Margaret, Tom, Sam and Hugh.
Scotch families McNeil, McDonald, and Munn
Annie McNeil's father's parents were Duncan McNeil, who was born 1823 in Scotland (clues suggest he might have been from the Isle of Colonsay), and Margaret McDonald, who was born Sept. 25, 1832 at Cape Bear, Prince Edward Island (PEI), Canada.
Margaret McDonald's parents were Angus McDonald, born about 1801 in Colonsay, and Catherine Munn born about 1805 in Colonsay.  They emigrated from Scotland to PEI and married sometime before 1830.
Allen McNeil, Annie's father, was born July 31, 1864 in Goderich, Ontario, Canada.  Allen was a sailor, according to the 1901 Sarnia, Ontario, Canada census.
What happened to Allen and Adaline McNeil is a mystery
After 1901 Allen and Adaline seemed to vanish.  On the 1910 United States Federal census, Annie was found living with a cousin in Michigan, and her brother Hugh was living in a boys home in Maine.  No further record of Allen or Adaline has ever been found.
Posted by Drifting Cowboy at 8:49 AM