Cowboy Culture -- A "bombproof horse" anyone can ride

Most horses are flight animals; that means their first reaction is to run from danger.  However,  I have one named "Ready Cash" that's a lot calmer than most.  Over the years I have exposed him to all sorts of scary things, and because I was careful to show him nothing bad would happen--while I was with him--not much frightens him today.
Now don't get me wrong.  He's had his moments, and some of those were a surprise to both of us.
Once when we were with a group of riders carrying Christmas toys to donate to a charity, we were running late and decide to trot up the trail.  I had a bag of Lego hanging from my saddlehorn.  Trotting set off a rattle Cash had never herd before, so he started bucking, and the more he bucked, the louder the Lego rattled.  Eventually I got him stopped.  I was careful to only walk the rest of the ride.
Another time we were riding alongside a babbling creek in a dark, shadowy canyon.  We rounded a corner and almost ran into a range cow drinking from the creek.  That cow and Cash both spooked at the same time.  Cash bolted and ran 30 yards before he slowed down to see what had scared him.
Being the "babysitter" horse he is, I figured he was a natural for cowboy mounted shooting.  We went to a beginner's clinic put on by a top shooter named Curt Moore.  We were all new, so everything was moving kinda slow.  We had just finished shooting our first five targets, and Cash was a little nervous, but I figured he'd settle down as he got a little more acclimated to the gunfire.  Just the opposite happened.  With each new shot Cash got a little more, let's call it animated.  Then he started spinning with me pointing a cocked single action straight up in the air.  To make a long story short, a week later I left on a seven-state quest for a "shooting horse," buts that's another story I'll post later. 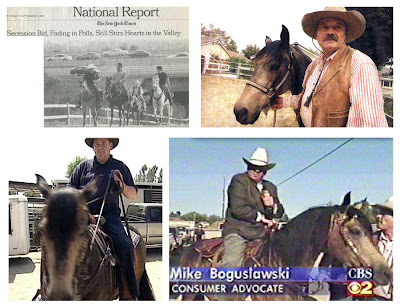 Because he's so steady he has become somewhat of a celebrity.  His picture has appeared in news articles, he's been on television with famous folks like City Councilman Greig Smith (lower left above) and CBS news consumer advocate Mike Boguslawski (lower right above). 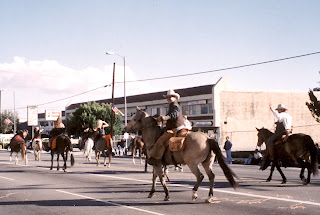 He has been in lots of parades like the 2002 Chatsworth holiday parade (above) with cowboys and saloon gals. 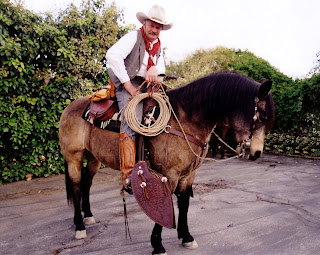 And he sure looks handsome when he's all decked out in old time gear (above). 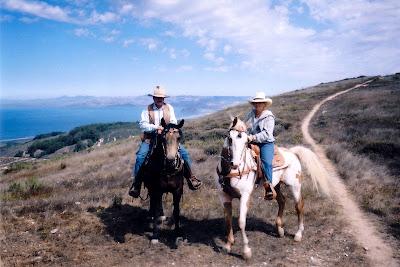 He's been about everywhere from the ocean to mountain tops. 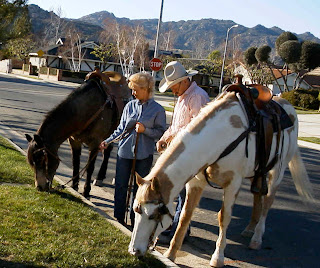 He was in a political ad with school board member Julie Korenstein (above). 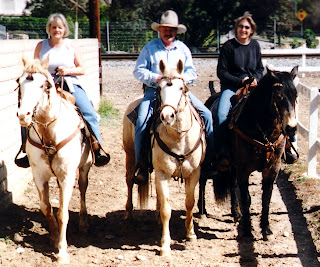 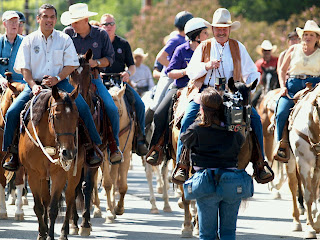 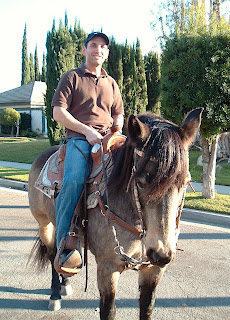 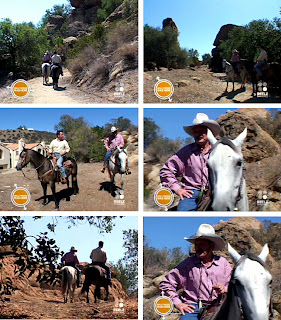 He carried actor Scott Conley to the Iverson Movie Ranch remains for a Reelz channel story produced by Chris Meagher and filmed by Tracy Birdsell in 2007. 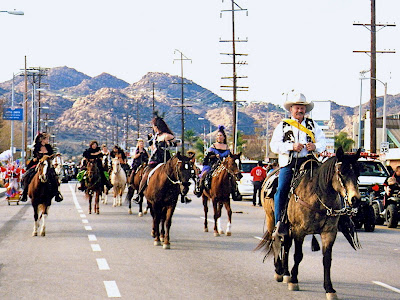 And, he made me look good when I was the honorary mayor for the Chatsworth holiday parade in 2005 (above).
Of course all my grandsons rode him http://a-drifting-cowboy.blogspot.com/2011/11/cowboy-legacy-great-grandsons-of-west.html
He's retired now because of problems that come with old age, but he's my mare's (Kasidy May) favorite and she gives him lots of love and attention.
Posted by Drifting Cowboy at 11:22 AM