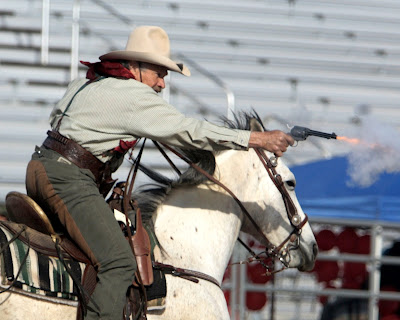 I had just completed a beginner's Cowboy Mounted Shooting clinic, and I was hooked.  It was about as much fun as I ever had had on a horse.  See http://a-drifting-cowboy.blogspot.com/2011/10/cowboy-mounted-shooting-only-has-two.html to learn about Cowboy Mounted Shooting.
I already owned a "bombproof," bulldog quarterhorse named Ready Cash.  He could turn on a dime and give you a nickels change, but when I tried shooting a gun off him, it was strictly no dice.
I went on a quest to find a trained "shooting horse"
I spent a couple of weeks searching the internet for horse traders or mounted shooters with trained shooting horses for sale.  I made a list of all the possibilities and got maps for California, Arizona, New Mexico, Texas, Oklahoma, Arkansas, and Missouri, and plotted a route.
First I drove to Cave Creek, Arizona, to rendezvous with a horse trader.  I tried a big blocky sorrel he had for sale, but nothing clicked with me, so I passed him by.
Next I headed to Gila, New Mexico, where I meet a horse dealer who told me he was short on trained horses just then, and shows me two scrawny bays.  I tried them both, but they rode worse than they looked.
"Adios," I said, and threw my saddle in the truck, consulted my Auto Club map, and pressed on for Texas.
When you see the Texas Hill Country for the first time, you'd swear you died and went to cowboy heaven, but as soon as you step out of the truck and feel the humidity.  you quickly take back your opinion of the place.
In Westhoff, Texas (70 miles east of San Antonio), I met a gal who had said she had a bunch of shooting horses for sale.  A bunch of horses turned out to be three. I tried a paint and sorrel, and passed on a palomino.  None were to my liking.
I was disappointed.  I had already traveled more than 1600 miles.  I had tried only five horses, but but none were worthy as a performance horse.
Checking the maps, I plotted a course to Galena, Missouri, 700 miles away and my last chance (unless I was willing to go all the way to Minnesota).
I made my way through Austin, Waco, and Dallas, and finally crossed into Oklahoma late in the afternoon.  Have you ever heard of a "pop-up thunder storm?"  Well I hadn't, but soon learned they are a nightmare to drive through.  Believe it or not when I finally pulled into Fort Smith, Arkansas to get gas, I actually found a dead frog on the running board of my trailer.  You'd have thought I was driving a submarine Instead of a Ford truck.
The morning of my fifth day of travel, I arrived at a pretty little ranch in Galena, Missouri owned by Roy and Teresa Cox.  They actually had several decent looking horses, so I tried two--a red dun and a gray roan.  I swore I'd never buy another mare, but after weighing all the pros and cons of the two horses, on the last day of July 2007, I bought a four-year-old, gray roan mare named Kasidy May.
I arranged to meet Roy at five in the morning to pick her up.  We pulled out of Galena before daylight.  I'd been told New Mexico has corrals at some of its highway rest stops.  My plan was to get through the Texas Panhandle before day's end.  However, when I got to New Mexico every rest stop had been closed for construction.   Just before Albuquerque it was pretty late at night when I led Kasidy to a pipe stall, gave her some hay and a bucket of water.  I bedded down in the back of my pickup.
After driving over 1800 miles in two days,  I finally got home to Chatsworth late on the seventh day of the trip.  It sorta sounds like a Republican tax scheme: 7-7-7 or seven days, seven states, and seven horses--not to mention over 4000 miles of driving.  Not bad for an old guy.
Many months later we went to two big shooting events in Arizona.  We won a 1st and a 2nd in our division.

Kasidy May is now eight years old and is the alpha horse of our outfit.  Mares tend to be pushy, so we've had a few ups and downs, but she's finally bonded with me.  In time she just might replace ol' Sandy as my best horse ever.
Posted by Drifting Cowboy at 11:48 AM