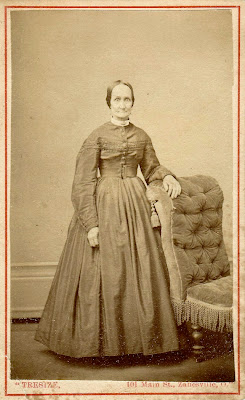 About 1997, when I first started researching my family history, there weren't nearly as many records online as there are today.  In those days I actually gleaned more information from Mormon church CD files than I could have found online.  I also spent an enormous amount of time writing to historical societies and county records clerks requesting information.  That's not to say there weren't some pretty good resources online back then, but a lot of them were volunteer efforts with limited data and were often slow to respond.
In those days I relied on websites, such as US Gen Web, Roots Web, and Gen Forum to submit queries, join mailing lists, and gather family vital records.  Over the years, ancestry.com acquired some of those early free websites, and in all fairness to ancestry.com, it often greatly expanded and improved what it had acquired.  Today a newcomer to genealogy can pay a subscription fee, go online. and instantly find an entire family history because of research done by others like me.  It sometimes irked me to find my research on somebody else's website, but I got over it, and now I'm just happy that it's there for others to find.
I was very lucky to have a family that saved photographs, and I've got some dandies that go all the way back to the Civil War.  For me the most amazing thing about researching family history online is the possibility of actually finding distant relatives who are willing to share their family photos of my ancestors
The photograph above was one that was in my mother's photo album.  She had no idea who the lady was.  Her album had grown over her lifetime as family members passed on and left their photos to her.  Eventually I discovered only one ancestral family had lived in Zanesville, Ohio, where the photo had been taken.  Further research yielded the fact that photographer (J.D.A. Tresize)  had spent only one (1860-61) year working at the address on the photo.  Eventually I learned the lady in the photograph was Charity Plympton. my third great grandmother.  It took ten more years to learn her maiden name from an obscure Iowa state census record.  She had been born Charity Winegard about 1815.
As a direct result of joining a mailing list in the 1990s,  I later obtained a photograph of her son Charles Plympton, my second great grandfather, in his Civil War uniform.  How cool is that? 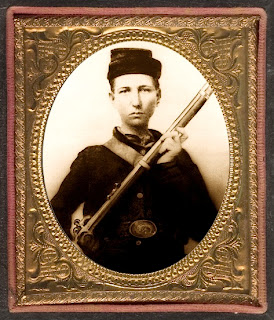 Private Charles H. Plympton had served with Company K of the 97th Regiment Ohio Union Volunteers between 1862 and 1865.  He saw action in the Defense of Cincinnati, Battle of Perryville, Battle of Stones River, Tullahoma Campaign, Siege of Chattanooga, Battle of Missionary Ridge, Atlanta Campaign, Battle of Resaca, Battle of Kennesaw Mountain, Battle of Peachtree Creek, Siege of Atlanta, Battle of Jonesboro, Battle of Franklin, and Battle of Nashville
All in all,  I can tell you that searching for your family will yield some pretty amazing results if you stick with it long enough.  I now have photos of some distant great great grandparents born in far away places like Newfoundland (1826) and Ireland (1800).  I've also made new friends and found some distant cousins I stay in contact with today.
I know who I am!  Do you?
Posted by Drifting Cowboy at 1:32 PM