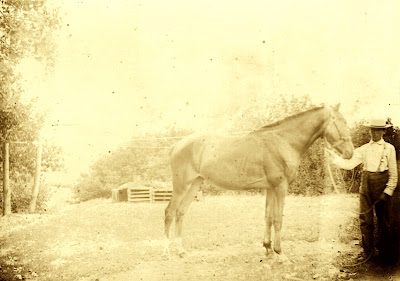 The  young boy in the photograph above is my granddad (Frank Bailey 1886-1968) with his prized Belgian colt. Belgians were the strongest working horses in the world (Now they are primarily used for parades and shows). The photo was taken about 1898 in Liberty Township near Comstock, Nebraska.
Granddad raised Belgian horses most of his life.  I know his grandfather (David Solomon Bailey) had a Belgian stallion in the 1860s when worked as a teamster--after he losing a leg in the Civil War.  I'd say there was a pretty good chance the reverence for Belgian horses had been passed on from father to son for at least three generations.
More about David Solomon Bailey can be found here: http://drifting-cowboy.blogspot.com/2011/10/cowboy-legacy-iowa-territory-1845-to.html 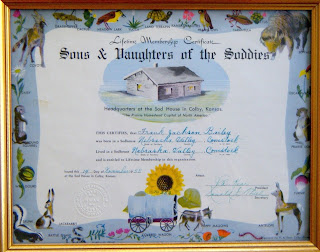 Granddad was proud of the fact that he had been born in a sod house on the Nebraska prairie.  I still have the certificate that he got in 1955, making him an official member of the Sons and Daughters of the Soddies.  It hangs with honor in a special place in my home. 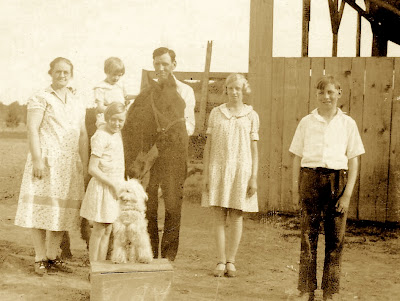 This photo of granddad and his family with a new colt was taken in Lewiston, Idaho about 1927.  As you can see he was still raising Belgians.
Posted by Drifting Cowboy at 1:41 PM