Cowboy Culture -- Says he can ride anything with hair on it! 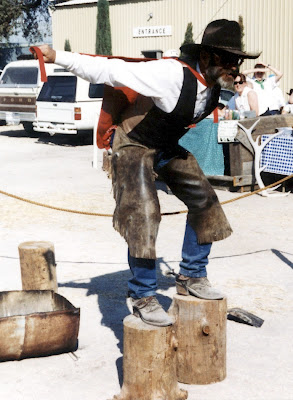 It was one of those three-day cowboy gatherings.  It had been a long hot day in Paso Robles on California's central coast.  It was Saturday night and the crowd had gone home hours earlier.  We all had a good feed of tri-tip beef sandwiches and baked beans, provided by a chuck-wagon outfit who call themselves the "Cowboy Cultural Committee."
It was time to just sit back and relax.  Some of the boys was tellin' some good yarns, while others were talkin' 'bout good horses and some great rides they'd been on.  I'll admit some of those boys was drunken' a little whiskey.
Things were mighty peaceful, when suddenly Ol' Don jumps up an allows, "Boys, I kin ride anything with hair on it."
One of the other cowboys was deep in thought--you could just see his wheels a-turnin'-- when he said, "I got a critter out in the back I'll bet you can't ride."
The challenge was on.  A few minutes later Don was stairin' down, and scratchin' his head when he says, "What is it."
Together the boys all chimed in, "Why it's Jerry's Piano Dolly, and it sure looks like it's been rode hard an' put away wet."

And, maybe a Piano Dolly that can't be rode.  Pass the whiskey please.
Posted by Drifting Cowboy at 9:32 AM