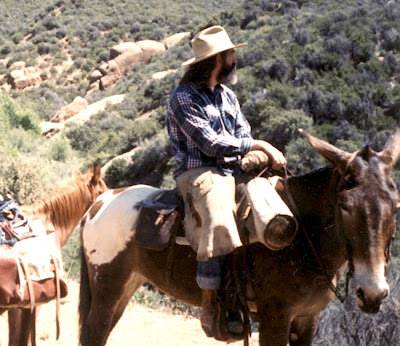 I lost another good friend a few years back.  His name was Tony Alvis.  He had been a wilderness outfitter and cowboy artist.

His obituary pretty much sums-up how he died.

His body, which was the first to be pulled from the landslide in La Conchita, was identified Jan. 11 by Ventura County authorities. He died of blunt force head and chest injuries.

He grew up in Pasadena, Calif., in the Arroyo Seco area amid the arts and crafts style of architecture. His early exposure to classic designs, combined with his interest in Western artists and his family's heritage in blacksmithing, created the foundation for his ironwork. He was known to many in Cody through his longtime participation in the Western Design Conference. As Wilderness Iron Works, he produced distinctive pieces, including chandeliers, gates, ornamental pieces and fireplace screens.

He also owned Los Padres Wilderness Outfitters and led horse and mule packtrips in the Sespe Wilderness. He helped lead federal researchers into the backcountry in southern California in 1986 when officials were establishing a condor sanctuary.

He was a former oil rig worker and an avid surfer.

He is survived by his parents Dane and Millie Alvis and brother Dan Alvis, all of La Conchita, and girlfriend Joann Webb of Ojai, Calif.

In 1992 Tony and I got acquainted when Elizabeth Flood wrote her book, "Cowboy High Style: Thomas Molesworth to the New West."  We were the only Californians in the book.

The next year (1993) we both attended the Western Design Conference in Cody, Wyoming  We spent a lot of time hanging out and getting to know each other in Cody.

In later years Tony and I made several trips to Arizona and Wyoming together.  He was great fun to travel with.

Back home in California--later in 1993--Tony took me on one of his wilderness adventures.  I will never forget that delightful experience.

When I attended Tony's memorial service (at the Thacher school in Ojai, California) I heard a packer friend of his tell the following tale (my best recollection--anyhow).
A packer's tale -- A Rope, a bear, and a giant

While packing into the Los Padres National Forest, with a string of mules in tow, two cowboys encountered a runaway bunch of pack mules headed back down the trail.  They were comin' straight at ‘em. With some quick thinking and a heap of action they blocked the trail, captured the runaways, then started back in the direction the stampeding mules had come from.

A short way up the trail they passed a muddy spot that gave them a clue to what had spooked the mules--in the mud there were fresh bear tracks with mule hoofprints on top of them.

They began to worry about the fellow who had lost his pack string 'cause those were some serious bear tracks.

They hadn’t traveled another 400 yards--when suddenly they heard crashing in the brush on their right!

Looking up--expecting to see a bear--what they saw instead amazed them.

A big giant--with a grizzled beard--was charging through the chaparral wearing only a sombrero, bermuda shorts, and huarache sandals. The giant was running down hill, at top speed, while swinging a huge lasso above his head.

Suddenly--on their left--the cowboys heard a weird metallic clanking on the rocks.

When the cowboys turned their heads they saw a black bear, with a steel trap on its hind paw, trying to out distance the bearded giant.

In his effort to escape the frightened bear scurried up a nearby tree as the giant closed in trying to snake his loop between tree limbs to snare his quarry.

After that lasso had bounced of the tree limbs for the second time -- it was more than the bear could handle -- so it leaped from the tree, hit the ground, and rolled into an arroyo full of rocks.

The bewildered giant gave up his chase and turned toward the cowboys offering his thanks for returning his mules.

As the clanking trap continued to echo off the rocks in the canyon above, one dazed cowboy looked at the bearded giant, and asked, “What would you have done if you had actually managed to rope that bear?”.

“quoin sabe,” Tony replied, “But, it sure seemed like a good idea to try to get the trap off that bear’s paw.”

He was was the genuine article.  A real cowboy and a great friend.  I miss him.  Adios and vaya con Dios, my amigo.