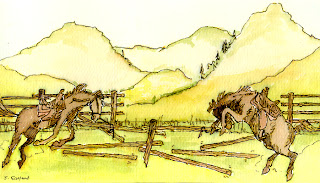 A few years back I wanted to go on a day-long horseback ride a little east of Yellowstone with a bunch of antique dealers who had just finished a big show in Cody, Wyoming.  Even though those folks dealt in "cowboy antiques," most of them were dudes from big cities, and few had any experience with horses.
Being a little short on dinero at the time and having a few horses of my own back home, I asked if I could help wrangle horses in lieu of paying the $125.00 ride fee.  My offer was quickly accepted, so I arranged to be at the outfitter's ranch at dawn the next morning to help get his stock ready for a 9 a.m. ride.
This ride was a pretty big deal because there were over 50 riders signed up to make the trip.  The outfitter had a small operation, and while he owned about 25 head of good saddle stock, he had to borrow horses far and wide to do the deal.  He had trailered horses to his ranch the night before and turned them into a large arena that was about the size of a high school football field.  When I arrived his two ranch hands had all the horses haltered and neatly tied to a six-rail fence.
In front of the barn, which opened into the arena, he had a pile of saddles and blankets that we began fitting to horses.  Things were going fairly smooth, considering almost every off-billet and cinch had to be adjusted to each horse.  Out of the blue there was a loud crack, the sound of breaking wood, and a flurry of activity on the far side the arena.  Two horses that were fighting,  had pulled back on their respective lead ropes, and the rail fence had given way.  Somehow they managed to loosen rails from two posts and break a center post in such a manner that they were both still tied to rails and to a stout fence post suspended between them.
The three of us cowboys stood there in amazement, and it wasn't until the horses with their connected lumber pile started moving toward us,  that we took any action.  Since they appeared to be headed toward the barn we scattered and jumped into stalls where we would safe from any flying timber.  Just as suddenly as those ponies had started twirling, they stopped--just outside the barn.  We slowly crept from the security of our stall fences to see if we could remedy the situation.  I was a lot older than the two younger cowboys, so I made the first move to get those critters untied.
I knew if those two terrified horses started the ball rolling again while I was uniting their lead ropes, there was a pretty good chance of my getting hurt.  That's when the sage advice once given me by an experienced old-timer came to mind.  "If you gotta untie a panicked horse the best tool is a sharp knife," my friend Tony had advised.  Because of him I always carry a horseman's Buck knife in my hip pocket, so I quickly sliced two $6 lead ropes,  freeing the horses.  We removed the lumber pile, tied two lariats across the hole in the arena, retied those two cayuses far away from each other, and resumed saddling horses.
The outfitter was fit to be tied over the loss of two good lead ropes.  I sure was glad when we got all those dudes mounted and headed up the trail.  That was only the beginning of a very long day, but that's another story for another post.  Meanwhile here's a poem the event inspired:
Wreck of '97
Early one morning in a corral we had fifty head of horses tied.
Us wranglers were fixin' saddles for all those dudes to ride.
When outta the blue with a couple of snorts an' big loud crack,
Sections of rail fence popped out as two cayuses pulled back.
It was sort a of a combination barn dance and strong whirlwind,
With all those fence rails a flyin' high as those ponies did spin.
An' when those two horses headed towards the ol' barn door,
All of us cowboys were sure enough huntin' for a hole in the floor.
Suddenly thirty feet of rail fence an' two horses came to stop.
The air became deathly still an' you could hear a pin drop.
We had to get these cayuses untied an' this mess untangled,
But how do you untie a scared pony without gettin' mangled?
Then to mind comes some cowboy wisdom an' words of advice,
If you gotta untie a panicked horse only a sharp knife will suffice.
So I crept in toward this little bay nag with a heart so forlorn,
I know if they start the ball rolling next I'll hear Gabriel's horn.
To my surprise first one pony then the other stood stock still,
An' I cut two lead ropes and watched those cayuses start to mill.
Dudes began to arrive an' pick the color of horse they liked best.
We'll never tell why two cayuses stood tied separate from the rest.
© Jerry England 1997