When iron was worth its weight in gold

Beginning in the mid 1970s I bought, sold, and traded cowboy gear and trappings, horse tack, native American collectibles, Old West antiques, and sporting collectibles of all kinds.
It didn't take long until my attention focused on goods created by California's famous Visalia Stock Saddle Company.  Over the years I owned many of that company's saddles, chaps, bridles, bits, spurs, saddle bags, belts, buckles, catalogs, posters, holsters, and other assorted collectibles.
In the 1980s and 1990s I was a dealer at the Cody Old West Show, the High Noon Show, The Western Design Conference, the Paso Gathering in Paso Robles, Cowboy Traditions in Tucson, and the Santa Ynez Vaquero Show.  I was also a long-time member of the National Bit, Spur and Saddle Collectors Association. 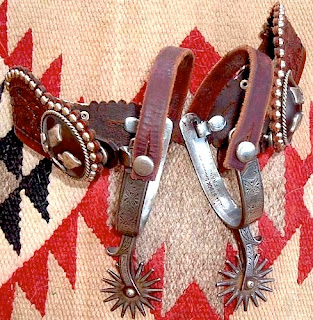 In the 1990s the value of good old California spurs skyrocketed, and sometimes those old iron spurs were worth their weight in gold.  In 1992, I bought a pair of G.S. Garcia spurs, made in Elko, Nevada, for about $3500.00.  I sold them in less than 90 days for $6000.00.  That was the exception rather than the rule, but if you collected the right stuff you couldn't get hurt.


During the past 15 years I've sold off my collection to buy hay for my horses.  Looking back I had a lot of fun dealing with cowboy antiques, but then there's also a lot to be said for the sound of soft nickers during early morning feeding time.
Posted by Drifting Cowboy at 4:01 PM