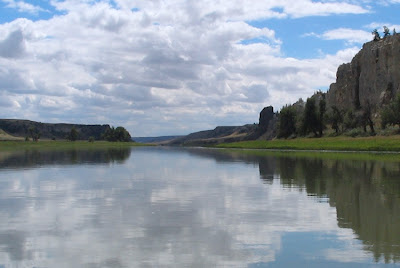 In the late 1980s, I developed an obsession for reading Montana history and collected books by James Willard Schultz, who spent many years living with Montana's Blackfeet Indians.  One Schultz story, not published until 1979, was Floating on the Missouri.  It was a boating adventure with plenty of history about the Upper Missouri River.  After reading that book I decided to float the Missouri River in the heart of Montana.  The thing that intrigued me most about the Missouri was its historical importance. 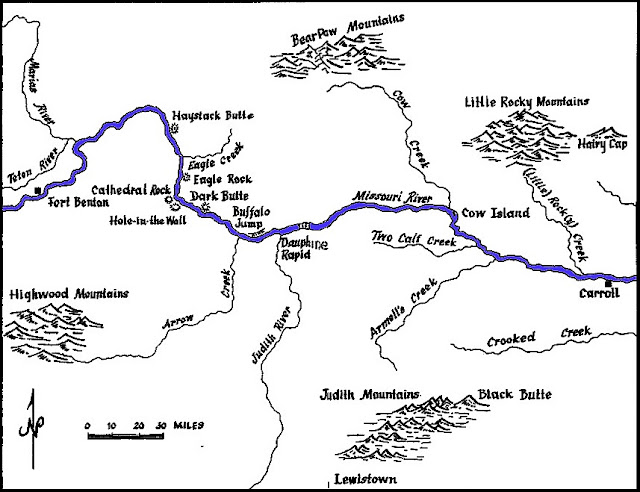 Above is Schultz' map of the Upper Missouri River as it appeared in the early 1900s.

Significant historic sites exist around almost every bend of the river.  There are at least a dozen Lewis and Clark campsites on the 150-mile wild scenic portion of the river between Fort Benton (my put-in) and the James Kipp Recreational Area (my take-out).  If you are interested in Native American history a lot happened on the Missouri.  Chief Joseph crossed the Missouri at Cow Island in 1877, when he and his Nez Perce people resisted the U.S Army's attempt to forcibly relocate them to a reservation in Idaho.  There were also several fur trade posts that existed on the Upper Missouri.  The best known was the American Fur Company’s Fort MacKenzie.  Steamboat landing sites and abandoned turn-of- the-century homestead buildings still exist, ready to be explored by canoeists. 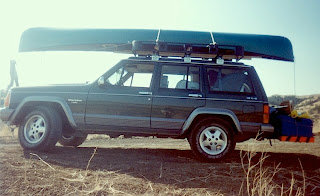 After finishing a week-long show at the Western Design Conference in Cody, Wyoming, the last week of September, 1994, I headed north toward the James Kipp Recreational Area in Montana to drop off the Jeep that I was towing behind my motorhome.  From there I made the four-and-a-half-hour drive to Fort Benton, where I planned to launch my 16' Old Town Penobscot canoe the next morning.

The Missouri is a wide, slow river with a current that flows about four knots an hour, and while it occasionally has some strong head winds, a good canoeist can average five or six miles an hour with steady paddling.  The weather is somewhat unpredictable in late September, and temperatures can drop to the 30’s and 40’s with rain or snow possible. 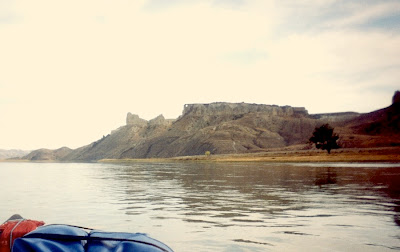 The scenery changes often, but isn't the least bit boring.  I traveled in a series of canyons through the heart of Montana's prairie. 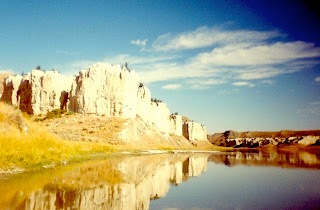 The most interesting landscapes were in the White Cliffs area, but I think the Missouri Breaks (Montana's Badlands) had the most abundant wildlife.  The river is alive with ducks, geese, and pelicans, and I often found myself in the company bald and golden eagles. 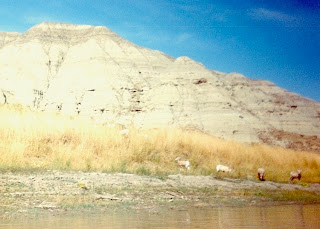 Several times I paddled right up to deer, elk, and even big horn sheep, and there was no shortage of night-time serenades from the coyote population.  Fishing was not as good as I had hoped for.  I did catch a few shad, but the only fish I considered edible was one fair-sized Sauger.  All in all, it was a great adventure, and a float trip I can recommend to anyone. 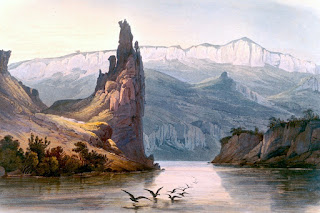 I happened to find a delightful print of "Citadel Rock" by Karl Bodmer c. 1833, so I dug though some old photos and found one of the formation I took on this canoe trip in 1994.  I was paddling down-stream so my photo is the opposite side. 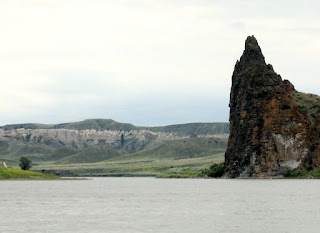 My photos for that trip were taken with a disposable cardboard box camera, so the quality was not nearly as good as I get these days with my Fuji waterproof digital camera.

Posted by Drifting Cowboy at 1:09 PM