I'm luckier than most folks.  I didn't need to watch ancestry.com's television series "Who Do You Think You Are?" to learn about my family history.  I only had to browse through mom's family photo albums.  Those wonderful old photographs portray a "cowboy legacy" handed down by my pioneer family as they gradually moved west from the original 13 colonies to California.
My study of genealogy has led me back to the beginnings of the United States, and Canada, and beyond.  I've traced both sides of my family back beyond the 17th century.  Some of my earliest ancestors go back more than twenty generations in old England, but I'm going to concentrate on my Western heritage after the Civil War and the invention of photographs. 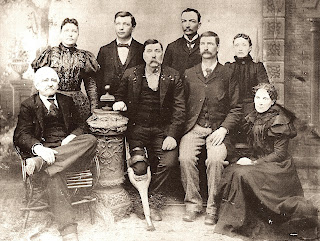 The photo above is Orange Bailey's family: (front row, left to right) Orange Bailey, David Solomon Bailey, David Jackson Bailey, Sophia (Boyd) Bailey (back row left to right) Nancy (Good) Bailey, unknown gentleman, unknown gentleman, unknown lady.  The photo was taken circa 1895 in Iowa.
Orange Bailey was a descendant of John Baily (1618 - 1696) who was one of 28 families that founded Haddam, Connecticut, and a great grandson of Oliver Bailey (1738 - 1822) who fought in the French-Indian War and Revolutionary War.
In 1845 Orange homesteaded in Iowa Territory.  From "The History of Davis County, Iowa" published in 1882:  "BAILEY, ORANGE, farmer and stock-raiser, section 18, post-office Albany; one of the first settlers of Marion township, was born March 11, 1811, in Bradford county Pennsylvania. He was raised a farmer; when 10 years of age, came with his father, Smith Bailey, to Muskingum county, Ohio; and eight years later moved to Franklin county, Ohio where he lived seven years. He received his education in the subscription schools. He came to this county in 1845, built a log cabin and endured the many hardships a pioneer is subject to. When he arrived with a wife and four children, $150 was his entire capital, and in less than a year his wife died, leaving him the care of four small children, and a new farm to attend too. His farm now contains 110 acres, all under cultivation. He is a member of the United Brethren Church, and in politics is a republican. He was first married to Miss Lydia Wagner of Franklin county, Ohio; and they had seven children: William S., David S., Rose Mantie, Ann, and three deceased, Warren, Charley S., and Mary 0. Was married again in January 1849, to Miss Nancy Good, daughter of Isaac Good of Muskingum county, Ohio, and they have had thirteen children; Thomas J., Elizabeth, Rachel, James H., Frances M., Hiram, Emma J., Austin, and five deceased, Franklin, Ira, Peter J., and two in infancy."
Orange outlived both of his wives and several of his 20 children.  He died in 1905, age 94. 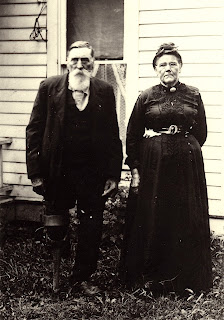 David Solomon Bailey's Civil War record: at age 26, residence Van Buren County, Iowa, nativity Ohio, enlisted on February 18, 1864, in Co G, 3rd Iowa Cavalry. He was wounded severely and lost a leg as a result of a shell that hit his foot on June 10, 1864, while in action at Guntown, Mississippi (battle known as Brices Cross Roads).  He mustered out September 8, 1865, in Atlanta, Georgia.
He married Sophia Boyd in Moravia, Appanoose Co., Iowa, March 13, 1859. Sophia was born in Ohio December 20, 1836. She was the daughter of Valentine Boyd, a blacksmith, and Sarah Grooms. Sophia died October 14, 1908, in Elkhorn, Nebraska.
After the war David moved his family to Elkhorn, Nebraska, where he earned his living as a teamster driving a wagon pulled by a team of draft horses.  David died July 19, 1915, in Spring Grove, Nebraska.
Horses were a significant part of my cowboy legacy, so it's no surprise that they've played such a major role in my life.  Watch for future posts under the heading "Cowboy Legacy."
Posted by Drifting Cowboy at 10:59 AM