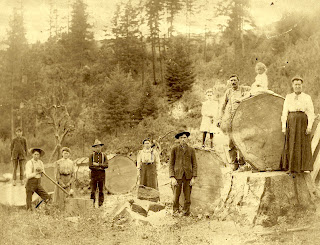 The photo above was taken in Kendrick, Idaho, about 1903, of David Jackson Bailey's family.  My grandfather, in the center of the photo with arms folded across his chest, was born in a sod house in Liberty Township, Nebraska, in 1886.  David, who was also known as Jackson, was a stockman, farmer and logger.
David Jackson Bailey was born in Moravia, Iowa November 19, 1865.  He married Lillian Amanda Pierce in Liberty Township, Nebraska, October 27, 1884.  He died May 12, 1949, in Lewiston, Idaho at age 83 from pneumonia, which was the end result of injuries suffered while breaking a horse.
More about Jackson from an article in the Lewiston Orchards Newspaper about 1946:
"Molasses Produced From Orchards Grown Sugar Cane"
AN ENTERPRISE in Lewiston Orchards meriting mention because of its pioneer character, ingenious construction, unusual production, and the personal history of the owners is the "one-woman-and-one-man" cane molasses factory operated by Mr. and Mrs. Jackson Bailey, whose combined ages total 156 years and who are one of the few couples in this section to have celebrated their 60th wedding anniversary.
Making molasses requires experience, foresight, energy and patience. The Baileys acquired these qualifications when they were a young couple residing on a farm on a bleak Nebraska prairie in the 1880s existing, for the most part, on what they were able to produce in a battle with the elements that in almost every alternate year dried up the corn, discouraged their efforts, and dashed their hopes. Even in the drought years, cane could be produced and molasses made to provide a sweet for the six children of the Bailey family residing in a three room sod house, so the parents became proficient in the art of reducing cane cider to molasses syrup.
It was around the turn of the century that the Bailey's gave up the fight with the wind and summer sun that destroyed their crops and decimated their cattle. They migrated to the West and settled on Bear ridge above Kendrick, Idaho where their seventh child was born and where they made their home until they moved to Lewiston Orchards 16 years ago.
When both Mr. and Mrs. Bailey were approaching the allotted three score and 10 years their children importuned them to retire from the farm. The habits of a lifetime are difficult to cast aside and while they acceded to the wishes of their progeny, they made no promises about refraining from continuing the activities they had found conducive to their good health and well being.
"Dynamite" Furnishes Power
On the five-acre tract to which they moved, they carry on with the energy and enthusiasm of young people. They not only raise their own fruit and vegetables, but sell a considerable quantity. They keep a horse, a cow, a pig, some chickens and a few hives of bees. Busy from morning until night, the Baileys sandwich in their operations at the molasses mill with other activities.
In the spring they plant cane on one acre of their tract and a passersby during the summer might mistake it for corn overlooking the fact that the tassel is missing. In the fall Mr. Bailey strips the cane while it is standing in the field, tops it to get the seed for the next planting, hauls It and piles the stalks near the molasses mill to await processing.
Mounted on a concrete pier it a convenient height is the cane press which has been In continuous use for more than 25 years. Above the press is rigged a home made power plant consisting of a long pole extending 10 feet on one side and four feet on the other. To the long end of the pole he hitches a fat, wise, old and trusty horse by the forceful name of "Dynamite" and on the other end places a bucket of rocks for a balance.
When the processing begins "Dynamite" reluctantly gets into clock-wise motion, the press begins to turn, Mr. Bailey feeds the stalks through and Mrs. Bailey on the opposite side pushes the squeezed stalks aside when they are later gathered up to be used for feed for the cow and to keep "Dynamite" in dynamo order. She Also watches to make certain the cane cider pours into the waiting barrel. After the barrel is filled with the liquid, operations are halted and the cooking process begins.
A fire is lighted in the outdoor cooking furnace under the long cooking vat and seven gallons of the cane liquid is poured into the vat and started cooking for three hours. Mr. Bailey must keep constant watch at the vat, stirring, skimming, and testing the bubbling contents.
"How do you know when it has cooked long enough?" an onlooker asked. "The same way my wife knows when jelly has jelled, " he replied. "It takes experience during which a lot of molasses is over cooked before one knows the right consistency of the syrup." 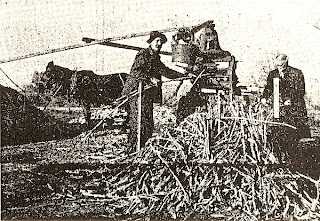 The 1945 photo above is of Jackson and Lillian Bailey with Dynamite.
Although both are approaching 80 years, Mr. and Mrs. Bailey are hale and hearty and ascribe their good health to hard work and temperate habits. "I could write a book about our pioneering experiences," says Mrs. Bailey. "We endured many hardships but we have a peaceful existence here in Lewiston Orchards and wonder why more people our age don't live on acreages where they can enjoy the pleasure of producing their own crops and the good health that continuous hard work brings about."
Mr. and Mrs. Jackson Bailey, with the aid of a trusty horse "Dynamite", operate a crude factory at their home in Lewiston Orchards where home grown cane is run through a press and the juice reduced in a nearby outdoor cooking vat to molasses. Although Mr. Bailey is 79 and Mrs. Bailey, 77, both are brisk and active and care for their five acre tract where they are more than self sustaining from the fruit and produce they grow. They are pioneers who emigrated from Nebraska to Idaho in 1901. They have seven children, 25 grandchildren, and 13 great-grandchildren and recently celebrated their diamond wedding anniversary.
Posted by Drifting Cowboy at 11:14 AM