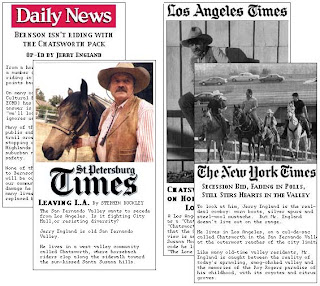 A Cowboy's lament: thoughts about valley secession
By Jerry England, published in New Times LA, July 25, 2002
Oh, gimme a home, where developers don't roam...
Not every longtime resident of Los Angeles loves the old pueblo.  In fact, when I'm asked where I live, I never admit to living in L.A.  Instead, I proudly tell 'em I live in the "cowboy town" of Chatsworth -- the last little piece of the Old West -- in the San Fernando Valley.
And the answer to the question of whether secession offers a better dream is a resounding yes!
There was a time when El Pueblo Grande offered plenty to folks and attracted newcomers with promises of opportunity:
A time when we manufactured cars and airplanes.  A time when we produced hundreds of household products in small factories across the Valley.
A time when public schools offered children a chance to get a decent education.  There was a time when agriculture peacefully coexisted with neighborhoods of custom-built homes.
A time when we actually had rapid transit in the Valley -- street cars called the Red Line.  A time when Hoppy, Gene and Roy showed us how to be good and how to fight evil.  Alas, that's all gone.
What went wrong with L.A.  didn't happen overnight.  It took years of neglect and political partnerships with rich developers to strip it of what was good and beautiful.
Years that were profitable for rich power-mongers and a few greedy politicians that clung to their coattails.  It happened so slowly most folks didn't even notice the change until it was too late.
Then one day we looked around and the orange groves and walnut orchards were gone.  The beautiful green hills that once pastured 10,000 cattle were gone.  The four-rail white fences that framed majestic horse ranches were gone.  The corner fruit stands and little dairies were gone.
They were all replaced by urban sprawl.  L.A.  earned new fame.  It became the city with the highest density and most traffic congestion in America.  It became a city with polluted waterways and air pollution that actually kills children and old people.
It's true that the neglect of our city of dreams and unique neighborhoods is not entirely the fault of the existing mayor and city council.  But, then again, are they doing anything to improve the situation?   Has any politician ever stood up and said stop the developers now?
Wait until we can do something about traffic congestion, polluted water and dirty air? Has any council person or mayor ever made a stand to save a unique neighborhood, a corner farm, a hillside full of sheep, or a grove of fruit trees? 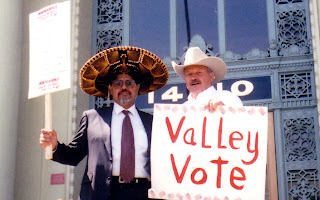 The answer is no.  Politicians are not about to bite the hands that feed them.    Many people who want the Valley to secede are united behind the idea of saving what's left of the environment.  We want to solve traffic problems.  We want clean air and water, and less noise.
Don't ask the career politicians who have worked for years at building relationships with real estate developers, tobacco companies and liquor merchants.  Instead, ask the new activists who are willing to step up and work for what they hold dear.  Ask the people who are fighting expansion of landfills.
Ask the activists who are trying to stop new high-density housing development -- those half-million-dollar homes -- that are not "affordable-housing," but will add traffic to roads already failing, more children to schools that are already crowded beyond their design capacity, and will further deplete already overburdened city services.
We are an apathetic society that would rather sit in front of our televisions and not think about the future.  Let the scientists focus on global warming while we spend our evenings channel-hopping.
Los Angeles is in chaos.  Look around and think about what it will be like for your grandchildren and great grandchildren.  How will they cope with traffic, air pollution, acid rain and a poor education? 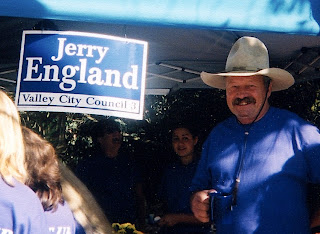 Let's try something new.  Let's elect some people who have been fighting for us.  Let's follow the one tenth of one percent who are not sitting in front of their TVs, but are at city hearings fighting to protect our environment and our quality of life.
Afterword -- almost a decade later...
The San Fernando Valley lost its bid for secession--Valley voters voted "Yes," but the rest of the city, "No."  Not much else has changed.   Los Angeles still has the highest density, worst traffic, and serious air pollution.  A weak economy has slowed down builders, but Valley taxes continue to be spent by downtown developers.  Now they want a new football stadium--what's wrong with the Los Angeles Memorial Coliseum?  Chatsworth still has horses, but there are fewer every year.

Posted by Drifting Cowboy at 12:30 PM