Canadian whiskey and the paint mare 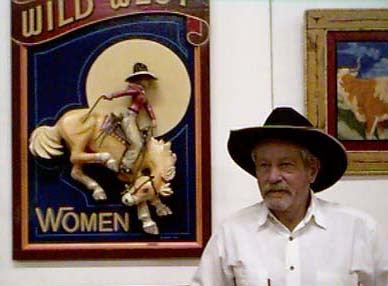 If you're real lucky--maybe a couple times in a lifetime--you'll meet somebody you really connect with, and a lasting bond will form.  In the late 1980s I met a cowboy artist named Roger Miller.  There were many things about Roger that intrigued me.  He had a great sense of humor, he was a talented artist, he loved horses, he had been a working cowboy--the genuine article-- and he liked to have fun.
We met at a cowboy antique show in Phoenix, Arizona and became instant friends.  Over the next several years we got together several times every year at antique shows and cowboy gatherings in Arizona, New Mexico, and Wyoming.  Occasionally we camped at a gentleman rancher's place near Tucson, where we spent a few days riding some good horses in the Saguaro National Forest.  We had both attended the Cody Old West Show and the Western Design Conference for a few years, and we both fell in love with the town of Cody.  Roger had lived in Glorieta, New Mexico, for many years, but sold his place to the federal government because they wanted to expand a civil war battlefield at Glorieta Pass.  Roger was suddenly flush--cowboy rich, you might say--so he did exactly what any good cowboy would do.  He bought a new pickup truck and headed to Cody to buy a ranch. 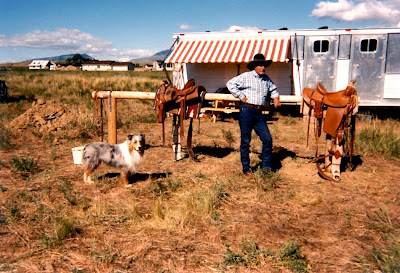 He found a neat little piece of land and opened an escrow.  He called me and asked if I'd come help him check out the title and make sure there were no restrictions on the land.  It was a sweet little eight-acre parcel, flat as a pancake, with irrigation rights, and good alfalfa grass.  Within a month Roger had dug a well, put in a gravel driveway, and bought a 40-foot horse trailer with living quarters to serve as a temporary home while he built a cabin.  I was visiting him just before the annual Cody Old West Show when he suggested, "You outta get yourself a horse; you could keep it here for free."  I hadn't owned a horse of my own for a number of years because I had been too busy earning a living and couldn't afford to board one where I lived.  His offer sure was appealing.  I've always loved horses and had owned several when I was growing up.  After all, I reasoned. I did spend a lot of time in Cody, and not having to buy hay or pay for board would make it possible.
To make a long story short, Roger called a horse trader that lived out on the north fork of the Shoshone River to ask if he had any good horses for sale.  The trader said he had plenty to choose from, and if we'd hurry he'd wait for us to get there.  Buying that horse became a pretty interesting cowboy experience.  Roger and I bought a fifth of good Canadian Whiskey, a bag of ice, and some paper cups in Cody, and headed for the horse-trader's place, about an hour-long drive 35-miles up to his place.  By the time we got there all the horses looked pretty good, and I was pretty sure I could ride anything with hair on it.  Roger pointed to a sorrel paint and said, "I like that one," so I gave it a try and bought a 16-year-old paint mare on the spot.
Roger and I then hustled back to Cody where we bought some fence posts and a roll of barbed-wire. Oh, I forgot to tell you, Roger had just closed escrow on his new ranch, and didn't have a corral yet. Roger darned near worked me to death over the next few days. When the horse trader delivered the mare a week later we had a one-acre pasture full of knee-deep grass for Amigo, my mare, and Roger's mustang, Star.  That 16-year-old mare must have been someone's pack horse, 'cause she didn't neck rein worth a d---.  A few months later I swapped her back to the horse thief--I mean trader--for a measly $500 boot money.  I finally ended up with a pretty nice palomino horse who is now 27 and retired in my backyard. 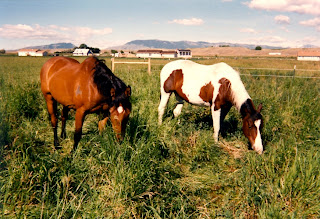 Roger crossed over the Great Divide in September 1998. Not a week has gone by without my thinking of him and the lively times we had over the years.  Adios, vaya con Dios, my amigo.
Posted by Drifting Cowboy at 1:12 PM