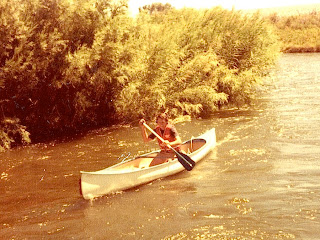 For a short time while I was growing up, I lived about eight miles from Bass Lake in Central California.   During the summer a friend and I would ride our horses to the lake.  Cross country reduced the trip to about four miles.  On a couple of occasions we tied a lariat between two pine trees and picketed our horses, so we could rent a canoe and go paddling.  That was in the late 1950s, and it was my introduction to canoeing.
About 15 years later (in the early 1970s), I was in one of the original big-box sporting goods stores and, on a whim, purchased a Nona canoe that was on sale.  In those days I was pretty naive and figured all I needed to go on a canoe camping trip was my backpack, camp gear, and a canoe, paddle, and lifejacket. 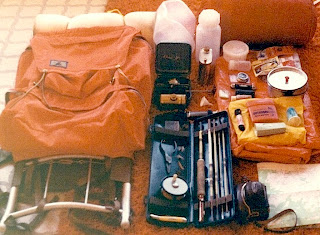 I had always wanted to go on a river canoe trip, but living in southern California didn't offer a lot of options.  Eventually I learned that the Owens River was supposed to be relatively easy for beginners.  The only thing I was warned about was 'strainers,' whatever they were.  A fellow I worked with agreed to go along on my canoe adventure, so we drove to Bishop, where we found a young guy who was willing to shuttle us at the end of the run.  We put in at a bridge near Laws and headed down stream without a care in the world.
That trip was everything I had hoped for and more.  We caught some nice rainbow and brown trout, saw all kinds of wildlife, and all in all had a successful canoe camping trip.  I won't go into detail about the few times we shot around a bend and ended up floating downstream backwards, or the time we ended up embedded about a fifty yards in a bed of cattails we had no intention of exploring, or even the several near misses with strainers.
In those days I didn't know about dry bags and never considered lashing anything to the canoe.   I learned that strainers are submerged trees that can trap you and your canoe underwater, and can drown a canoeist.  Strainers are the one thing, above all else, that still scare me the most.  Looking back we were darn lucky not to have capsized, lost our gear, and maybe our lives.
Posted by Drifting Cowboy at 6:10 PM