Whiskey and horses don't mix -- tequila might kill you

I've known plenty of cowboys, and a few cowgirls too, that thought four fingers of good whiskey coupled with a long gallop on a fast horse was a fun time.  I've known folks who rode their ponies into saloons (terrifying patrons), got dusted on hard pavement, and ended up with an assortment of rods and screws to hold their bones together, and even one poor fellow whose horse ran into traffic and got killed while he lay in a stupor.
I was luckier than some.  With a belly full of tequila I galloped my old palomino up a little-used trail, only to have him stop short at a wash-out, and send me flying over his head.  After which he jumped over me, and headed home on a series of deer trails weaving through tall chaparral.  For me it was a long walk home in dense brush populated with rattlesnakes.
The poem below is the funny version of that not so funny incident.  I can tell you my riding trails have been a whole bunch smoother since I quit drinking a few years back. 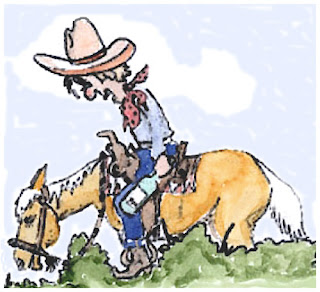 One sunny afternoon not too long ago,
We decided to the Cantina we outta go.
An’ a bunch of us riders drank right freely
Of Los Toros Margaritas filled with Tequily.
Of that fire water we had sampled plenty.
An’ just when we were outta money
Somebody at the end of the bar cried,
I think we should saddle up and ride
We said at the burnt out house we’d meet.
I was in the saddle but couldn’t feel my feet.
When my pony stopped to eat the grass he liked best,
I decided to get off his back and lay down for a rest.
An’ the truth is I dozed off for a minute or so,
It was then the riders decided up the trail to go.
Something was wrong and I woke with a start,
So I jumped in the saddle and up the trail I did dart.
We were galloping along free as you please,
An’ the next I knew I was on my hands an’ knees.
Then I saw my pony ploughing through that chaparral
An’ knew it was a long walk back to the home corral.
Now it was well after dark when I got home,
But all my pards were there, I wasn’t alone.
Everyone was hungry so we headed for Sergio’s.
When they backed away I asked, " What’s up, amigos?"
Then on my shirt sleeve somebody’s napkin flicks,
An’ together they shouted, "You’re covered with ticks!"
So I dusted my hat and changed to a clean shirt.
I’ve learned my lesson, to this day I will assert:
I may go to Los Toros along with my pards,
But drinking killer tequily isn’t in the cards.
An’ if we drink fire water then decide to ride,
I’m pretty sure ol’ Sun Up will run and hide.
©Jerry England 1999
Posted by Drifting Cowboy at 12:26 PM