Growing up cowboy -- in the San Fernando Valley 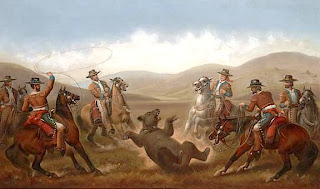 The image above is James Walkers painting of California vaqueros roping a bear, circa 1877.
In the 1800s vaquero traditions were established in California's San Fernando Valley by the Spanish missions and Mexican ranchos.  California's vaqueros were excellent horsemen who preferred well-bred stallions and the elegant dress of Spanish gentlemen-ranchers. Their horse-training methods included the use of single-rigged Visalia saddles, hand-braided hackamores, silver-mounted spade bits, and rawhide reatas.  Those trappings are still admired by horsemen today.
In 1914, something magical happened.  Filmmaker Cecil B. De Mille discovered the Valley while looking for a location to shoot his epic Western "The Squaw Man."  For the next 60 years, thousands of Western movies and TV shows were filmed on locations throughout the Valley.  The film industry became a major Valley employer.
In the 1930s, most of Hollywood's six-gun heroes worked for a single studio, such as Warner Brothers, Universal or Republic.  Many of the early cowboy actors, such as Gary Cooper, Tom Mix, John Wayne, Roy Rogers, and Clark Gable bought ranches and moved to the Valley.
By the 1940s, such celebrities as Barbara Stanwyck, Zeppo Marx, Janet Gaynor, William Holden, and Robert Taylor boasted of owning working horse-ranches.  Northridge called itself the "Horse Capital of the West." 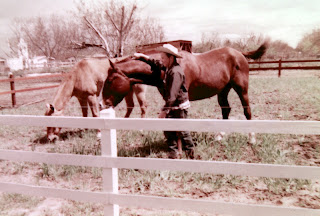 In the 1940s and 1950s, when I was a child growing up, the Valley was still full of movie cowboys, beautiful ranches, and fine horses.  Where I lived, in rural Woodland Hills, most kids had a horse or two in their backyards.  As youngsters we rode our horses to Calabasas, Canoga Park, and Chatsworth on dirt roads.

If you look at the background of the photo above you'll get a pretty good idea of what Woodland Hills looked like in the early 1950s. 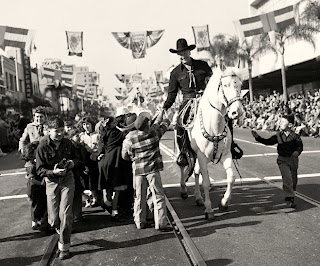 1952 - While attending the annual Rose Parade in Pasadena, youngsters were sometimes treated to actually meeting their cowboy heroes.  I was one of those lucky kids who got a souvenir good luck coin directly from Hoppy.
1953 - As a boy I played broomstick polo at Rosemary Gibert's ranch, an old equestrian center that long predated Hidden Hills. 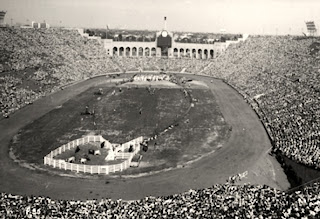 1955 to 1956 - I attended the Los Angeles Sheriffs' Rodeo at the Los Angeles Coliseum and remember there being more than 100,000 fans in the stands.  One of those years--1956 I think--Roy Rogers was the Grand Marshall. 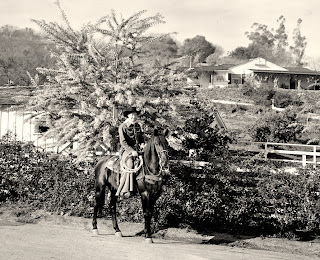 1954 to 1955 - Cowboy star Wild Bill Elliott lived just down the road from me on a ranch in Calabasas where he hosted Junior Equestrian horse shows. 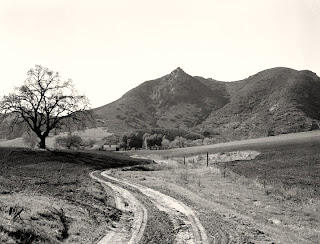 1955 - The remains of what had been the Platt Ranch during the 1940s was about 1,100 acres in the vicinity of Bell Canyon. Before that it was formerly known as Rancho El Escorpion.  Miguel Leonis built an adobe barn here in the 1870s, and it still stood until the 1960s.  I remember riding past the old barn and dreaming of bygone days of the early vaqueros and cattle ranching.
1955 - There were plenty of interesting characters left over from an earlier era that reminded us of a passing West.  While out on a trail ride I met a fellow named Don Brandstetter.  He had a beautiful Arabian stallion named Balane.  We got to be pretty good friends, and Don showed me some great places to ride.  We sometimes rode our horses under Ventura Boulevard through a huge 8' diameter iron culvert, and we'd stop by the old Calabasas general store for a Nehi soda.
Don really loved that stallion and would do some mighty funny things with that horse.  I remember him holding up his canteen so he could share a drink with his horse, and I remember him inviting the horse into his house.  I'll admit ol' Balane had pretty good manners.  A special treat was watching Don and Balane in the Rose Parade dressed in full Arabian attire. 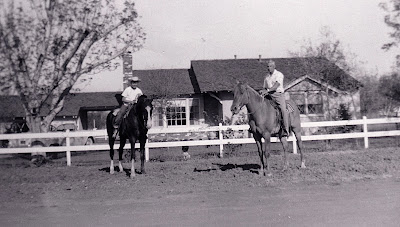 The photo above is my dad and me on Manton Avenue, Woodland Hills -- a dirt road in 1955.
1956 - Sheep herders were still bringing their sheep wagons, horses, border collie dogs, and herd of sheep to graze off the wild oats that grew across the road from my home in Woodland Hills.
1957 - The Valley was getting way too populated for my dad, so we moved to Oakhurst, a hamlet in the High Sierras (population 356).   I moved back to the valley in 1965, and now live about eight miles from where the photo above was taken.  Today the San Fernando Valley, if it were separated from Los Angeles, would be the sixth largest city in the United States.
If you'd like to know what Calabasas looked like in 1956 have a look at this short YouTube clip taken from an old 8 mm home movie: http://www.youtube.com/watch?v=UcD2ztO7jC8
Posted by Drifting Cowboy at 3:31 PM