One man's meat is another man's poison 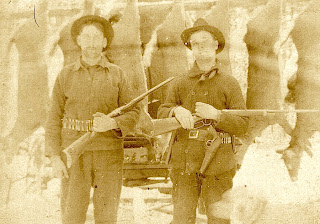 Granddad told me a great story about the photo above.  It was taken in Montana about 1915.
He and his brother had been deer hunting near the family homestead.  He had been working his way through a small meadow surrounded by thick lodgepole pines when suddenly he spotted a running deer.   He raised his rifle and fired, but the deer kept moving.  Quickly he levered another cartridge and fired again.  This went on for several seconds, and he lost track of how many shots he had fired.  He thought he had been shooting at the same deer until the action ceased, and the gun smoke settled.  Only then did he realize that he had never missed, and actually shot seven different deer.  Count them for yourself.
What was an important source of meat for pioneers, like my granddad, later became an American sport.  I remember my dad preparing for his annual hunting trips every fall.  I wanted to go with him, but was always told, " Wait until you're a little older."
Then in 1957, we moved to Ahwahnee, a little hamlet in the foothills of California's high sierras.  My dad was in the process of building a home in nearby Oakhurst.  The population of Oakhurst in those days was about 360 people, and Ahwahnee had even fewer residents.  One evening when dad came home from work, he called me outside and presented me with an early birthday present.  It was a used Savage bolt-action .30-30 rifle.  I think it was the very next day that I enrolled in a Hunter Safety Course so I could get my first hunting license.  I was still 15 when deer season opened, and I couldn't wait to get my first deer.
As luck would have it on the morning of opening day I went outside to feed my dogs, and there, at the edge of the woods, stood two fork-horned bucks.  I ran back in the house, grabbed my rifle and one cartridge, and scooted out the back door to a kneeling position.  I lined my sights on the bigger of the two bucks, took a deep breath, and fired.  By this time dad was standing behind me.  The buck jumped straight up in the air, and bolted into the woods.  "Buck fever," I remember dad saying, yet I was convinced I had hit him.  We went to see if there was any blood on the grass, and there not more than 30 feet from where he had stood lay my first deer.  The bullet had gone right through his heart, and it was reaction that took the buck as far as he had gone. 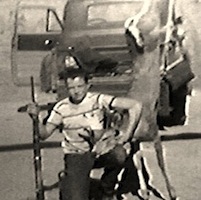 On one hand I was pretty proud of myself.  I had just passed a right of passage.  I was a hunter.  On the other hand that little buck weighed only about 130 pounds, and  had the softest brown eyes I had ever seen on an animal.  I went hunting a few times after that, but never shot another deer.  Today I don't see the need for killing "big game." To me they are beautiful just to behold and photograph.
Posted by Drifting Cowboy at 10:15 AM