Some folks may call my rod and reel vintage 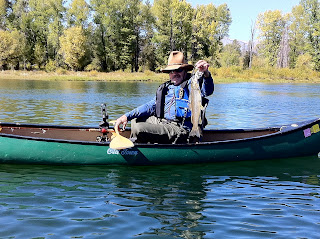 Last month I went to a local tackle shop to get some new 6-pound test line for my Mitchell 300 reel.  The young fellow who waited on me had to get some help because he wasn't familiar with my reel.  After the store owner came to his rescue, the youngster commented, "We don't see many of these antiques anymore."
Some young folks may call my rod and reel vintage, but I always figure if it ain't broke don't fix it.  I've been fishing with the same Mitchell 300 reel and Fenwick Feralite rod for more than 40 years, and I've caught a ton of lunkers with them.
My dad took me fishing a lot when I was growing up, and it's one of the good habits that stuck.  Dad would spend hours trolling Ford-Fender flashers on lead-core line behind his little aluminum Velco boat, but the putt-putt noise, the smell of gasoline, and the boredom of going around in circles never appealed me.
When I got a little older I decided to buy a canoe that wouldn't take up any space in the driveway, and could be car-topped to the nearest lake.  I discovered that canoeing was not only inexpensive and good exercise, but also was an equally good way to catch fish as my dad's boat trolling methods.
I still troll to catch fish, and I still occasionally use Ford-Fender flashers on lead-core line, but my preferred method is trolling Rapala lures on mountain rivers and lakes.  There's something magical about the surge and glide of a paddled canoe that really adds to fishing success.
So, if you see an old guy with outdated tackle in a 25-year-old Old Town Canoe, just shout "Howdy!"  and we'll compare stringers.

Posted by Drifting Cowboy at 2:15 PM