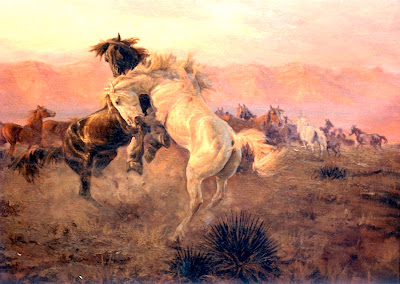 To me Charles Marion Russell was one of the West's most fascinating characters.  He had been a real working cowboy (in Montana during the 1880s).  He had lived with the Blackfeet Indians for a short time, and learned their manners and customs.  He experienced the real Old West before its end, and he--better than anyone else--recorded it on canvas and in words. 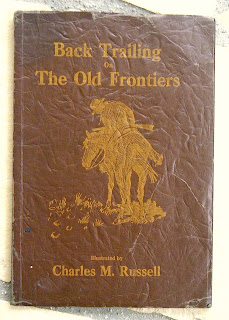 Back in the 1970s I started collecting and reading his books; titles like "Back Trailing on the Old Frontiers" (1922) a collection of fourteen stories illustrated by Russell, that had appeared in Sunday editions of daily newspapers in all parts of the United States.  The stories were about Discovery of Rocky Mountains -- The story of Fort Benton -- Adventures of Hugh Glass -- Three Musketeers of the Missouri -- Alexander Harvey, bad man -- Kit Carson -- Yellowstone Kelly -- The Pony Express -- The Fetterman Disaster -- The Wagon Box Fight -- Chief Joseph -- Tragedies of gold seekers -- The Texas Trail -- Battles of Crows. 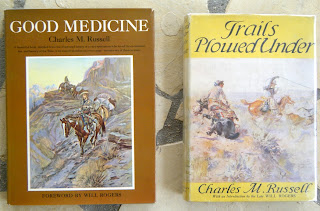 Other Russell books I collected included "Rawhide Rawlins Stories" (1921), "More Rawhides" (1925), "Trails Plowed Under" (1929), and "Good Medicine: The Illustrated Letters of Charles M. Russell" (1929).  I discovered that Charlie had incredible wit and wisdom, and there was plenty to be learned from his writings. 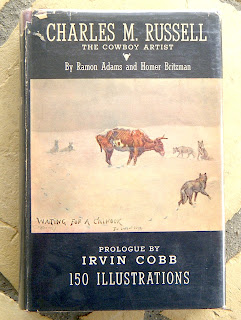 When my son Mike and I toured old Montana in 1987, Mike took the photo above (top of page) and gave it to me when we got home.  About that time I acquired a book titled: "Charles M. Russell: The Cowboy Artist" by Ramon Adams and Homer Britzman (1948).
I discovered that Charlie (like me) had lots of human frailties.  He was both a genius with words and a master artist.  His paintings had humor, intrigue, and suspense.  They were a visible record of the history of our American West.  They captured the beauty of Montana's landscape--some say, even better than the Old Man created it.
He is and always will be one of my cowboy heroes.
A few of my favorite Charlie Russell quotes include:
"I ain't no historian but I happen to savvy this incident."
"The West is dead... you may lose a sweetheart but you won't forget her."
"A woman can go farther on a tube of lipstick, than a man can with a winchester and a side of bacon."
"Between the pen and the brush there is little difference but I believe the man that makes word pictures is the greater."
and my all time favorite…
"The West is dead, my friend
But writers hold the seed
And what they saw
Will live and grow
Again to those who read."
Writing this post got me thinking about seeing Russell paintings for the first time… I'm guessing it was about 1950.  They surely were the inspiration for my own first bit of Western art scribbled on the back of a postcard and addressed to my mother. 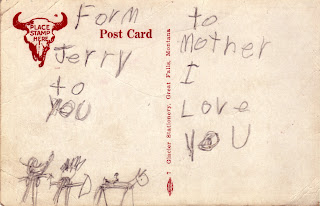 I was 7 years old when I sketched the cowboy, Indian, and saddle horse on the postcard above.  My spelling isn't a whole lot better today.  Thank goodness I'm married to a retired English teacher who is willing to proof read my writings.
Posted by Drifting Cowboy at 1:15 PM