Meanwhile back at the ranch -- Three Ages Rock 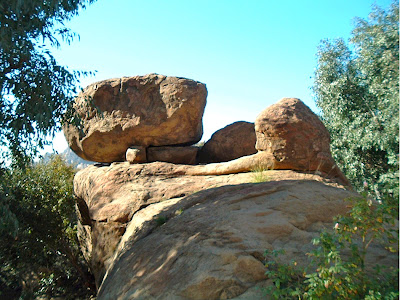 Another frequently filmed landscape feature on the Iverson Movie Ranch is a rock dubbed Three Ages Rock, honoring the successful 1923 Buster Kenton comedy with the same name.  Three Ages Rock (above left) is part of a formation that is nestled against the south end of the Cal-West Townhomes development.  The exact location is about a half mile north of Santa Susana Pass Road on the east side of Redmesa Road in Chatsworth, CA. 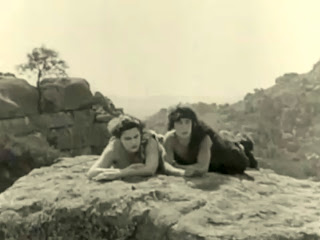 As you can see in the screenshot above, Three Ages Rock is high above the surrounding gorge, and has Nyoka Cliff (to the south) for an exciting backdrop. 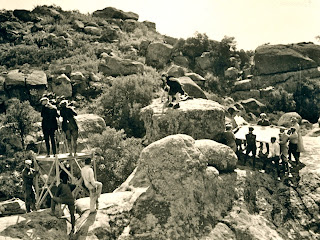 In the still above from Three Ages (1923), Keaton and his film crew are rehearsing the stunt where he will appear to be actually falling off backwards (to be caught in the safety net). 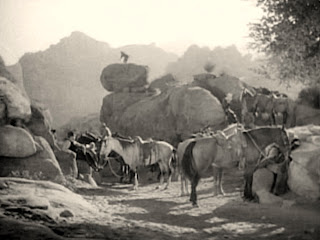 In the screenshot above taken from Land Beyond the Law (1937), you are looking at Three Ages Rock as photographed from the north. 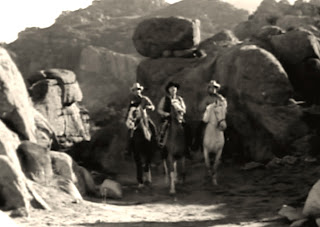 Here's another screenshot from Ghost Town Gold (1936) also photographed from the north, but at a slightly different angle, so you can see some of the other formations further south in the gorge. 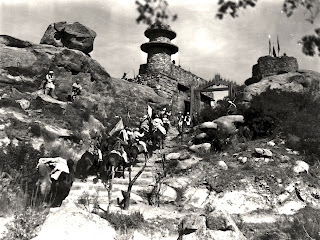 In the still above taken from Wee Willie Winkie (1937), the camera is in the gorge looking north.  Three Ages Rock is to the left of the castle turret in the center of the photo. 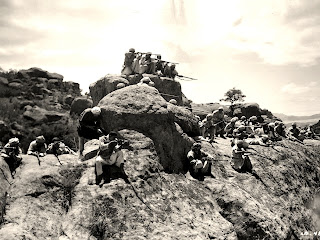 This time the still (above) taken from The Charge of the Light Brigade (1936), the camera is positioned to the northwest looking toward the southeast. 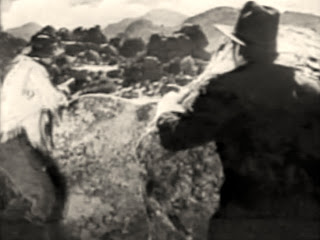 In this final screenshot (above) taken from They Died with Their Boots On (1941), the actors are between Threes Ages Rock and one of the smaller rocks to the southwest that is part of the same formation.  As you can see the camera is pointed toward the Garden of the Gods and the flat area to the south where a camera mount still exists today.

A very short list of the many dozen of films that include scenes with Three Ages Rock are: