I first met Joe Beeler at one of the early High Noon shows (Mesa, Arizona) in the early 1990s, and then I got to visit with him again in 2004 at the last High Noon show I attended.  Joe was there to promote his new book: Joe Beeler -- Life of a Cowboy Artist (2004), published by Diamond Trail Press.  I'd been a big fan of his for decades, so it was a real pleasure to spend time talking with a genuine hero of mine.  I had to have his book, and was lucky to get this little sketch when he signed it. 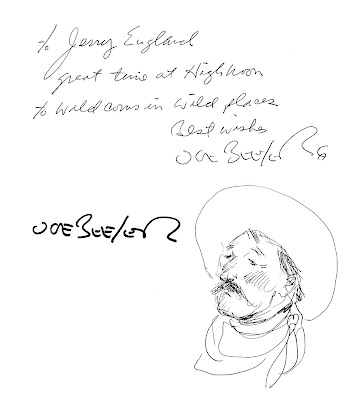 A year later I was shocked to learn he'd crossed over the Big Pasture.  When the Old Man calls me,  this is the way I'd like to go…
(An excerpt from an obituary by Richard Nilsen, as published in The Arizona Republic, April 29, 2006)
Joe Beeler, Western artist, dies in saddle
Heart attack takes 74-year-old
Cowboy artist Joe Beeler died Wednesday in Sedona, and his passing was as characteristic as his painting.
"He was in the saddle when he died," friend Steve Todd said. "He was working on a ranch with friends and neighbors, branding calves . . . and he slumped forward in the saddle and died of a heart attack."
The last remaining founding member of the Cowboy Artists of America, Beeler was 74. According to Todd, he frequently visited the ranches of friends to help out at branding time.
"He really lived his life as a true Westerner," said Ed Reilly, owner of the Bronzesmith foundry in Prescott Valley, where Beeler had his sculptures cast for the past two decades.
"Unlike some other members of the Cowboy Artists of America, Joe really was a cowboy," said Maryvonne Leshé, partner of Trailside Galleries in Scottsdale, where Beeler had showed his work since 1977. "And going through his home was like visiting the history of the West."
Beeler was named an Arizona History Maker in 1994 by the Arizona Historic League, an honor that meant a great deal to him.
Posted by Drifting Cowboy at 9:31 AM