Cowboy Wisdom -- Horse sense or credit where it isn't always due 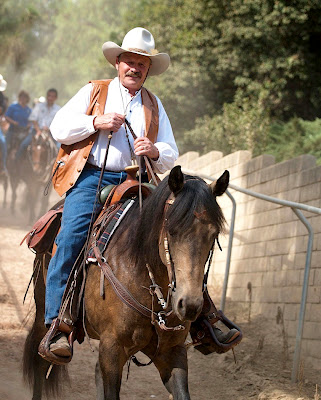 Sometimes you'll hear a person described as having "horse sense" because they display good judgement or a logical approach to things.  To me horse sense is what the Old Man gave a horse's ancestors to help the species survive.  It's instinct.
Most horses have an incredible memory, and when they notice a change in their environment (usually on a trail away from home) they get suspicious and avoid whatever has changed.  Instinctively they avoid new landslides (no matter how small), newly fallen trees, anything white (an outfitter friend believes they think it's ice), and anything black (I believe they think it's a deep hole).
My mare wouldn't put her dainty hooves in a black boggy area to save her life.  To my knowledge she's never been stuck in a muddy bog, but then again I'll give you long odds one of the ancestors has.
Horse sense among horses (in my experience) isn't what keeps them from getting in trouble, but rather what they do after they get in trouble.
About five years ago I had a hip replacement--it isn't a lot of fun, and it takes several weeks before you can walk without help of some sort.  I hired a fellow to clean my stalls, and my wife had to cowgirl-up and feed the horses for about five weeks.  The first morning I went back to tossing hay to 'em, I noticed ol' Cash (who is normally first to the feed trough) wasn't in his stall.
I found him in corner of his back run and figured he was sick or hurt.  When I went in and tried to move him I soon realized his left hind hoof was pinned to the bottom fence rail.  All my horses usually sleep behind their stalls with their butts up against the back wall.  I guess it's an instinctive thing that makes 'em feel more protected against predators.
What had happened was a small iron strap that holds a board in place under my no-climb wire fence had slipped over the heel of his shoe and wedged tight between the shoe and sole of the hoof.  I could barely walk let alone crawl, and I sure couldn't move quick if that knothead suddenly panicked.  I had no choice, so I crawled under him and tried to lift his foot and pull it back to release the heel.
It was strictly no dice: that strap and shoe were anchored solid.  I went to the house to wake my wife and to find some sort of tool to cut the strap.  Considering the strap and the shoe were anchored to the bottom of the fence (in the dirt) with no space between, I didn't have a lot of options.  I selected a cold chisel and a 20-ounce hammer and returned to the stall.
Now's where the horse sense comes into play.  Cash could've struggled to get free.  A lot of horses would have.  Horses aren't real fond of strange noises underneath them.  It took me a full 30-minutes to cut that strap with a hammer and chisel, and every whack of the hammer jarred the heck out of Cash's hoof.  That little horse never so much as flinched.  He had enough horse sense to know that I've never hurt him, and that without my help he was stuck.  I've never owned a horse yet that would fight me when they know I'm helping them.  That's horse sense.
Posted by Drifting Cowboy at 7:08 AM