I'm betting most folks have a mystery photo or two in an old family album or a box of grandma's treasures.  I have a couple of beauties that I'm sure someone would be thrilled to have. 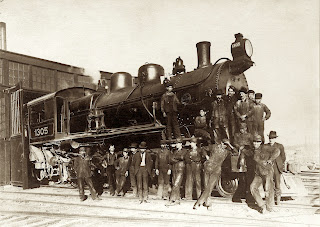 With the aid of a magnifying glass I've discovered the photo above is a Great Northern Railway locomotive and it's crew.  The cab has number 1305 and below the number are smaller letters GNRT.

I'm guessing the photo was taken around 1900, and based on my family histories I think it was taken possibly in Nebraska, Idaho, Montana or Iowa.

This is a great photo that was mixed in with my Bailey and Brown family photos.  If anyone has any idea who, what, where, why, when or how... please share.

I'm including the authors of "Steam Locomotives of the Great Northern" on my
reply, because F-9 photos are uncommon due to the early rebuild. We'd love
to have a high-resolution scan for our archives and website, if you have one
(full credit provided of course)

I sent them a copy 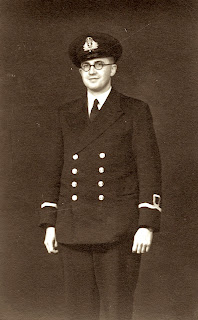 Who is this gentleman?  I know he was my grandfather's cousin.  I believe he is wearing a WWII British Naval Lieutenant's uniform.

Second cousin surnames could also be: WILKIE and BUTCHER.

If anyone has any idea who, what, where, why, when or how... please share