Things aren't always what they seem 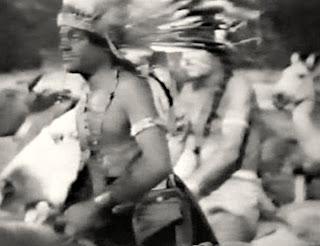 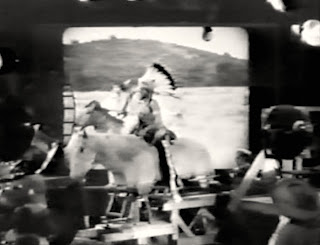 Instead, he is really sitting on a mechanical horse on a sound stage at Republic Pictures' studio.  The other Indians and the outdoor scenery are being projected on a screen behind him.  The screenshots above were borrowed from a delightful video -- Hollywood on Parade - Matinee Ranch -- created by movie and TV historian Graham Hill.

Mechanical horses and rear projection is still widely used by the film industry.  In fact, many of the riding scenes in Steven Spielberg's War Horse (2011) were crafted using this method.

To see the use of rear projection at its best check out this clip from Spoilers of the Plains (1951) on YouTube http://www.youtube.com/watch?v=0KnMswEsPqI&feature=youtube_gdata_player 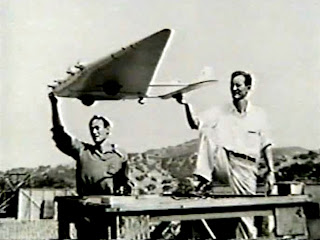 Some of the early Republic Pictures serials featured extraordinary space ships that were actually models. 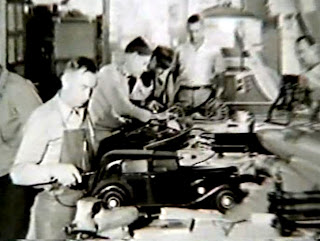 In fact, Republic had a whole shop filled with talented model builders that crafted all sorts of wonderful scale models -- most of which ended up being blown to pieces in a special effects explosion. 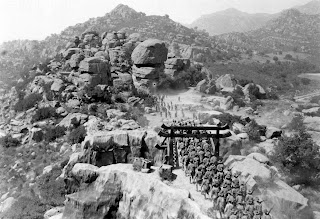 In the silent film Tell it to the Marines (1926) the marines marched over a bridge (photo above) in front of the Garden of the Gods.  Was this a massive bulldozer job or a movie trick?  It's a technique called 'matte painting.'  In this case the cavern, bridge and troops are part photograph -- and part painting -- printed on the lower portion of a sheet of glass.

Since the unprinted area (on the glass) is clear the camera records the action beyond the bridge and the real Garden of the Gods. 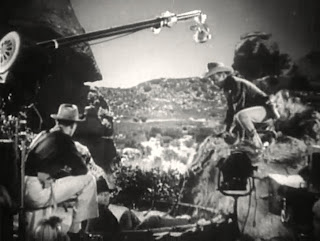 In Under California Stars (1948) -- when Roy Rogers was celebrating his 10th anniversary in the movies -- was he in the Garden of the Gods out on the Iverson Ranch in Chatsworth?

Watch this clip and you'll see things aren't always what they seem.  Roy and the crew are on a sound stage and the Garden of the Gods are a rear projection :-)

Posted by Drifting Cowboy at 8:12 PM