The Brandeis Movie Ranch was located immediately west of, and contiguous to, the Iverson Movie Ranch in Chatsworth, California.  The treeline seen in the background of the opening scenes of the "Lone Ranger" (1949) TV Series was the dividing line between the upper Iverson Ranch and the Brandeis Ranch.

To learn more about the Brandeis Ranch's history see my earlier post at http://a-drifting-cowboy.blogspot.com/2012/01/cowboy-culture-six-degrees-of_23.html

Identifying features on the Brandeis Movie Ranch included a bunkhouse with a ramp, a caretaker’s house with a low pitch roof, and a rudely-constructed Western Street -- which the local Chatsworth residents nicknamed 'Hickeyville.' 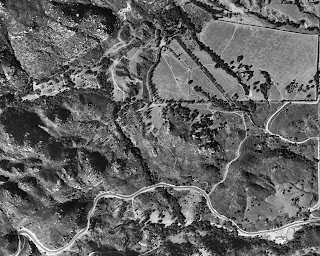 Hickeyville was located in a canyon at Hialeah Springs about half a mile northwest of the Iverson Ranch entry road (the lighter area on the far left and just above the center in the photo above).  Filming on the ranch began about 1936 and concluded with Treasure of Ruby Hills (1955).  Just a few of the many cowboy stars that worked on the Brandeis Ranch include Buck Jones, Tim McCoy, Harry Carey, Hoot Gibson, Ken Maynard, Rex Bell, Tom Tyler, Johnny Mack Brown, Bob Steele, Charles Starrett, Gene Autry, George O'Brien, John Wayne and Wild Bill Elliott. 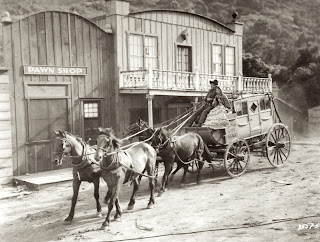 The movie still above is from a scene in John Wayne’s Winds of the Wasteland (1936) -- that's Wayne driving the four-up stage (photo courtesy of Bruce Hickey). 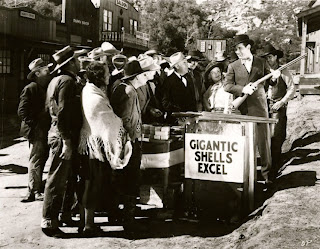 The photo above from Johnny Mack Brown's Desert Phantom (1936) was taken with the camera filming to the west. 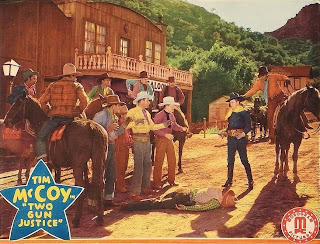 The arch-topped saloon with the balcony seen above in a lobby photo promoting Tim McCoy's Two Gun Justice (1938) was one of the better looking structures on the street. 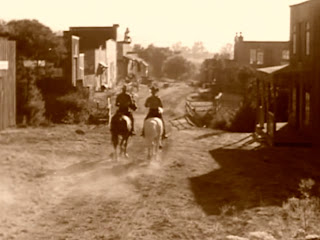 Hickeyville was often portrayed as a ghost town as you see here in a screenshot from a Three Mesquiteer's oater Ghost Town Gold (1936). 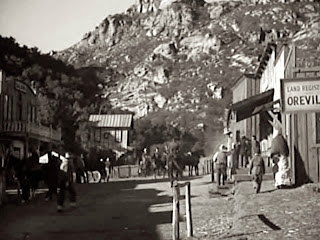 But, it could just as easily be presented as a bustling cow town as it was in Bob Allen's Law of the Ranger (1937). 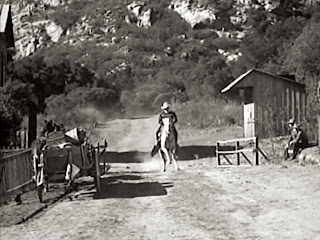 In another screen capture from Law of the Ranger (1937) we get a glimpse of a wooden bridge at the far western edge of the Western street. 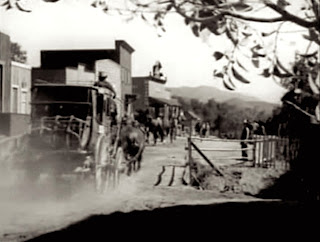 Here's another look at the bridge in a screenshot taken from Tom Tyler's Roamin' Wild (1936).  This time the camera is facing east.  See this photo come alive at http://www.youtube.com/watch?v=HXGeitfim8I&feature=youtube_gdata_player 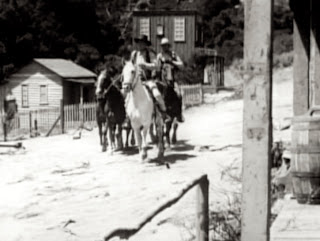 In this capture from John Wayne's Winds of the Wasteland (1936) we see a flat roofed two story building (behind the horsemen) on the south side and west end of the street.  The following year, 1937, the roof had been changed to a full pitched roof when it appeared in Law of the Ranger.

The screen capture above from The Singing Cowboy (1936) gives us a look at the north side of the street at the west end. 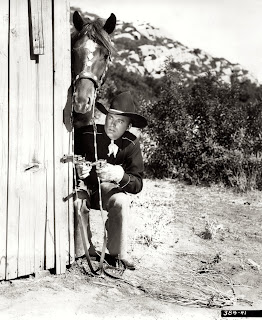 This final publicity still for Bob Baker's Ghost Town Riders (1938) gives us a glimpse of the rocky slopes north of the street.  Chatsworth's famous Rocky Peak sits just west of (and above) Hialeah Springs and the Brandeis Ranch.

My list of movies filmed on the Brandeis Ranch includes:

As you might have guessed I've wrapped up my 'Meanwhile back at the ranch' posts about Iverson Ranch features, but there's still lots to share about other Chatsworth movie filming locations.  Stay tuned...