Meanwhile back at the ranch -- Grove Relay Station 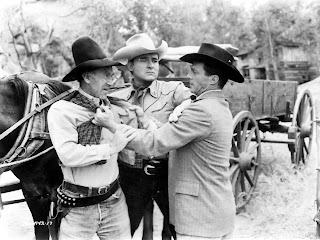 Located on the western half of the grove--about one yards south of the Iverson Western Street--a two-story stagecoach relay station was tucked into a rocky cove.  It was partially hidden from view by a stand of trees as you can see in the still above from Arizona Territory (1950) (starring Whip Wilson).  It has come to be known as the 'Grove Relay Station.' 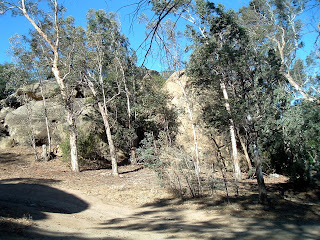 The 2009 photo above shows the rocky cove and the location of the Grove Relay Station as it appears today.  Most of the eucalyptus trees in the photo were fully mature when John Ford filmed Wee Willie Winkie in 1937. 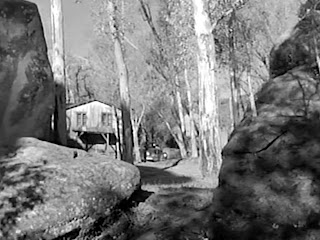 The screen capture above from a scene Columbia's Blackhawk: Fearless Champion of Freedom (1952) serial shows you the location as filmed from a distance.  It sure looked like a secluded hide-away in this shot. 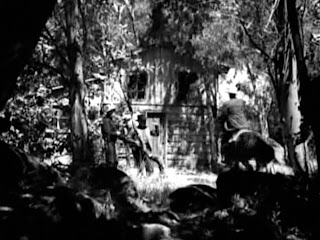 The screenshot above from Charles Starrett's The Fighting Frontiersman (1946) gives you a better look at the front of the structure. 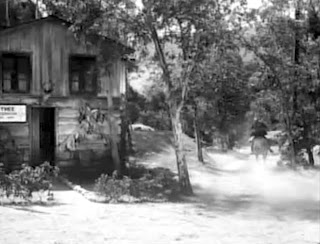 Above is a look at a narrow chase road that headed west from the station as seen in The Phantom Rider (1946) serial.  This Republic serial starring Robert Kent, Peggy Stewart and LeRoy Mason was also known as Ghost Riders of the West. 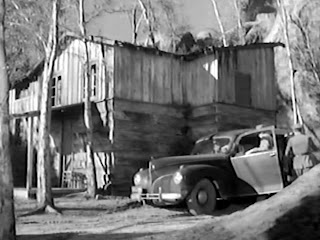 This final screen capture from another Blackhawk: Fearless Champion of Freedom (1952) scene gives you a good look at both the east and north elevations of the cabin as well as a glimpse of the rock outcroppings behind.