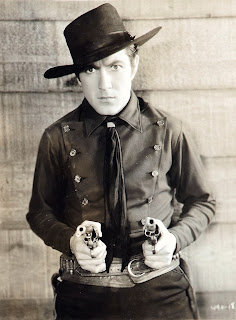 During my early research of Santa Susana Mountains filming locations I encountered a credit for Billy the Kid (1930) that said it had been filmed at Porter Ranch.  That was it--just Porter Ranch--not Porter Ranch, California or Porter Ranch, San Fernando Valley.

Having ridden horses in the San Fernando Valley's Porter Ranch I was skeptical because I believed the chaparral should have been denser than that depicted in the movie. 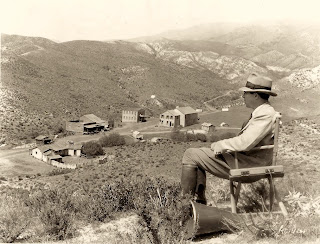 Recently I found another Billy the Kid (1930) movie still (above), and because--in my opinion--the photo resembles Oat Mountain I decided to do some additional research.

I've discovered two books that state Porter Ranch, California had a Western town set (built by MGM) that was used to portray Lincoln County, New Mexico (the home of William Bonney, also known as Billy the Kid, circa 1880).

Those books are Location Filming in Los Angeles (Page 113), written by Karie Bible, Marc Wanamaker and Harry Medved, published 2010 and When Hollywood Came to Town: A History of Moviemaking in Utah (Page 286), authored by James V. D'Arc, also published in 2010.

I won't say whether or not I'm convinced, so I'll just borrow a line from one of my favorite movies…

At the end of The Man Who Shot Liberty Valance (1962) a newspaper man, finally understanding the truth about the killing of Valance, burns his notes and says: "This is the West, sir. When the legend becomes fact, print the legend".

Billy the Kid (1930) was filmed at Porter Ranch, California 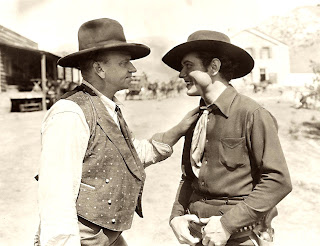 Billy the Kid (1930) is a tale about the relationship between an 1880s New Mexico outlaw Billy the Kid (Johnny Mack Brown) and sheriff Pat Garrett (Wallace Beery), the man who later killed him.  The movie is based on the book The Saga of Billy the Kid, written by Walter Noble Burns. 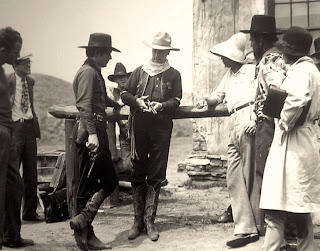