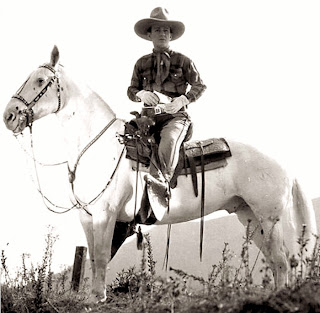 Jack Perrin (1896-1967) was an American cowboy actor and silent film star.  Perrin may have worked in films as early in 1915, with Mack Sennett, before enlisting in the Navy in World War I.  The photo above is Jack and his horse Starlight (courtesy of Bruce Hickey).

After World War I, about 1919, he landed a contract with Universal.  In 1921 he left Universal and starred in dozens of B-Westerns for smaller studios such as Rayart (later Monogram), Aywon and Arrow Pictures.

In the late 1920s he returned to Universal to star in a series of Canadian Mountie adventure pictures.  Like many early Hollywood cowboys Perrin fell victim to the "talkies," and was forced to start accepting supporting roles and bit parts.

Bobby Copeland in his excellent book Silent Hoodbeats tells us Jack's horse was billed as Starlight, the Wonder Horse, but he deserved better support.  I agree there's a scene in Gun Grit where starlight actually runs down and eliminates a bad guy :-)

During his nearly 50 year long career in both film and television he appeared in over 330 titles. 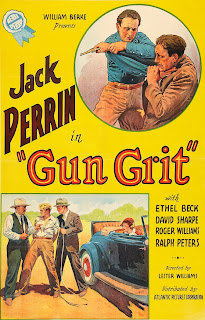