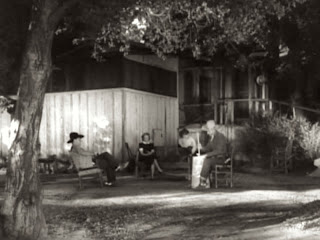 As I mentioned in earlier posts the three most identifying features on the Brandeis Movie Ranch were the Western Street (Hickeyville -- http://a-drifting-cowboy.blogspot.com/2012/06/brandeis-movie-ranch-hickeyville.html); the Caretaker's House (http://a-drifting-cowboy.blogspot.com/2012/06/brandeis-movie-ranch-caretakers-house.html); and the Bunkhouse seen above in a screen capture from Santa Fe Stampede (1938)

To be perfectly honest I've never figured out exactly where on the ranch it was located; I suspect it was most likely on the lower (southern) part of the ranch.  I believe it might have also been in the same group of rock outcroppings as the Caretaker's House.

The thing that makes the Brandeis Ranch Bunkhouse easy to spot is the unusual ramp and rustic railing leading to the front door as you can see above in a screenshot taken from The Feud of the Trail (1937).

As you can see in this capture from Bill Elliott's The Last Bandit (1949) the Bunkhouse was nestled right up against a huge cluster of rock outcroppings and -- like the Caretaker's House -- was almost completely concealed in a shady grove of oaks.

In another screenshot taken from a scene in The Last Bandit (1949) we get a close-up look at the flimsy rustic railing and the front door. 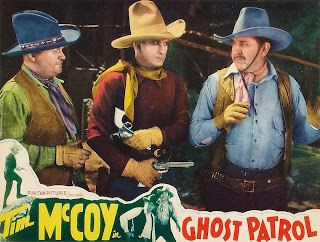 Tim McCoy was one of the actors most often lensed on the Brandeis Ranch, so it's no surprise that the Bunkhouse was used in a lobby card photo (above) to promote Ghost Patrol (1936). 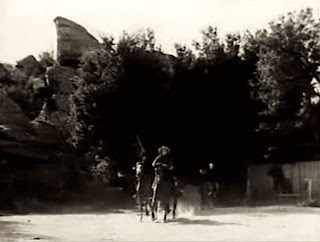 As I pointed out the Bunkhouse was surrounded by rocks and trees.  Here's screenshot from Outlaws' Paradise (1939) that gives us a look -- camera left -- of a shark-fin shaped boulder towering above. 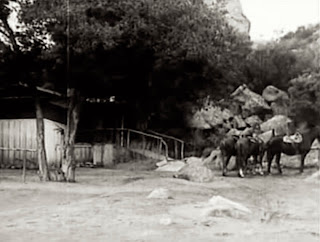 This final screen capture also from Outlaws' Paradise (1939) that gives us a look -- camera right -- of another boulder towering above the Bunkhouse.  This side also has a small boulder field running right down to the hitching rail.

Here's a link to my short YouTube clip from Outlaws' Paradise (1939) that gives you a look at the Bunkhouse and the surrounding area: http://www.youtube.com/watch?v=BroRdD7DWg4&feature=youtube_gdata_player