Meanwhile back at the ranch -- Iverson Ranch Set 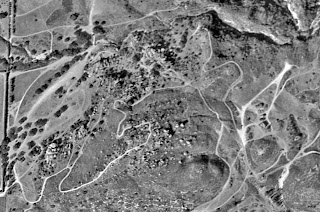 Some early cinema researchers called the Iverson's ranch set the 'Middle Ranch,' but it was actually located on the eastern potion of the upper Iverson Ranch.  On the far right 1/3 of the photo above you can see several roads or trails that appear almost white.  Those are the chase roads around the ranch set.  If you look very carefully you can just make out some of the buildings. 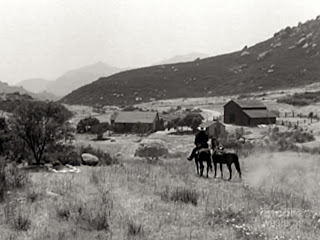 In the screen capture above from Rough Riders of Cheyenne (1945) (starring Sunset Carson) you can see (left to right) the ranch house, a guest cottage, and the barn. 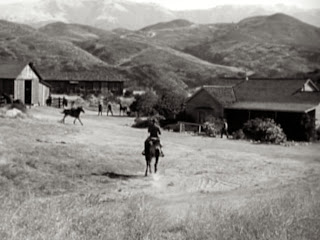 In the screenshot above from the "Wanted: Dead or Alive" (1958) TV Series--a few years later--we also see a bunkhouse behind the barn on the left side of the photo.  It's possible the barn was there in the Rough Riders of Cheyenne screen capture, but was out of the frame.  Anyone who knows for sure is welcome to email me.  Because we can see Oat Mountain in the background we know the camera is pointed north capturing the south elevation of the ranch house (take note of the bay-window and awning on the left portion of the elevation). 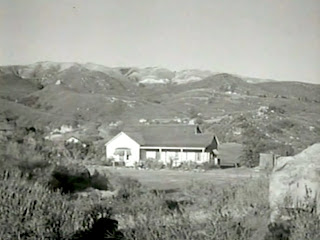 Here's a screenshot from Blackhawk-Fearless Champion of Freedom (1952) that gives us a look at the area around the ranch house, and a better look at Oat Mountain in the distance. 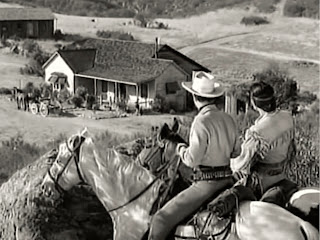 Above is another image capture--this one is from the "Lone Ranger" (1949) TV Series -- in it we are looking at the southeast corner of the ranch house.  That's the bunkhouse in the top left corner. 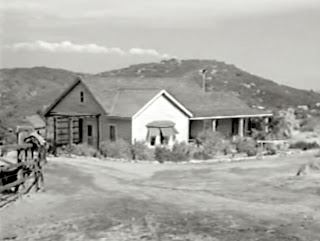 Above is a screenshot from a scene in Desert Vigilante (1949) this time we are looking at the southwest corner of the ranch house (take note of the trellis on the west elevation).  Rarely, but on occasion the west side is used to depict the front of a smaller house. 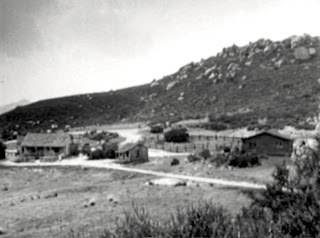 Okay, I know this is a really fuzzy screen capture, but it's the best full view of the north elevation of the ranch house I could find.  The capture is from a scene in Judy Canova's film Lay That Rifle Down (1955). 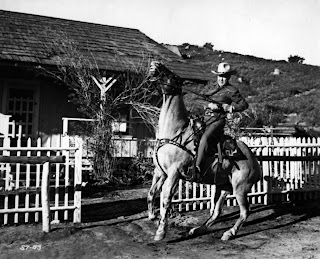 Here's a another look at the north elevation in a movie still from Johnny Mack Brown's Dead Man's Trail (1952).  Did you notice the 45 degree angled braces on the porch posts in this still and in the screenshot from Lay That Rifle Down above?

This still from Eddie Dean's The Westward Trail (1948) gives us a look at the porch on the south elevation of the ranch house. 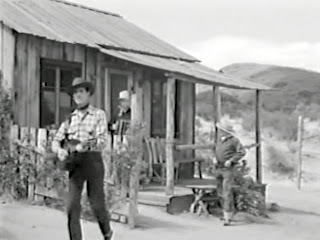 The shot above from Charles Starrett's Desert Vigilante (1949) and gives us a close-up look at the guest cottage.  The cottage had a variety of porches tacked on the front over the years.

In the capture above from Gene Autry's The Hills of Utah (1951) we are looking at the north side of the ranch house and cottage. 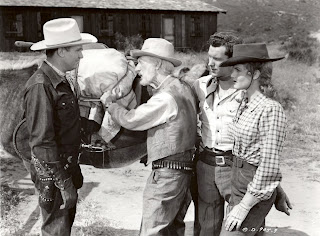 To the best of my knowledge the bunkhouse is nearly always filmed with the camera pointed north capturing the south elevation as you see above in a still from Gene Autry's Loaded Pistols (1948). 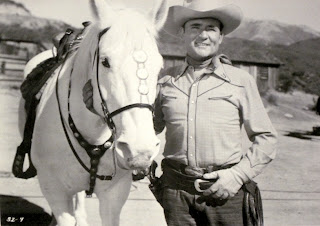 Here's another still from Night Raiders (1952) with a glimpse of the bunkhouse behind Whip Wilson. 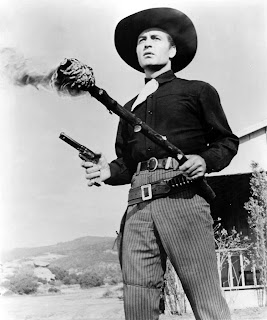 Sometime after the "Fury" (1955) TV Series began a new barn and ranch house appeared on the west side of upper Iverson Ranch.  In the still above from Badman's Country (1958) we see the porch of a new house (behind George Montgomery) and a rock formation (in the left bottom corner) that was part of the Festival Rocks group on the upper ranch.  See my post about the missing Festival Rocks formation at http://a-drifting-cowboy.blogspot.com/2012/05/meanwhile-back-at-ranch-festival-rocks.html 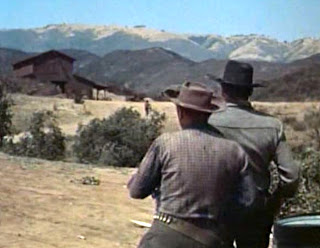 Here's a screenshot (above) with a look at the new 'Fury Barn as it appeared in Return to Warbow (1958). 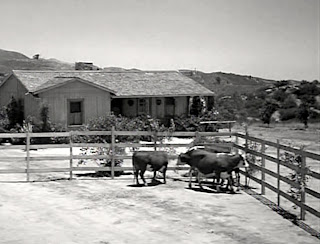 The screenshot above is from a scene in Five Guns to Tombstone (1961) and gives us a look the newer house on the upper Iverson ranch.  My friend Dennis Liff (a fellow Iverson Ranch blogger) says he believes the house was built to resemble the older ranch set on the eastern half of the ranch.  He also says the back side of the house above has an elevation that resembles the old bunkhouse.

This final screen capture from The Gambler Wore a Gun (1961) shows us several buildings on the upper ranch that were new in 1961, and not part of the 'Ranch Set' sometimes called the middle ranch on the eastern part of the upper ranch.  I hope this isn't too confusing :-)

Posted by Drifting Cowboy at 8:33 AM